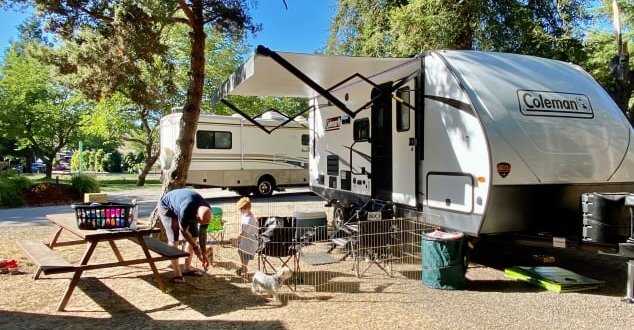 Freedom to go anywhere. An ability to be totally self-sufficient. The potential for nonstop adventure.

These are just some of the reasons Michaela Sherer had spent years fantasizing about owning a Recreational Vehicle, or RV.

She and her husband always had found reasons not to get one. Then, earlier this year, when the coronavirus pandemic effectively grounded the airline industry and crippled most other means of travel, the 41-year-old mother of two raised the question: Why not now? 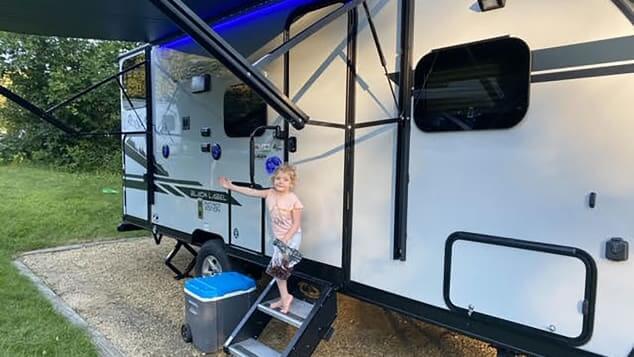 The Sherers discussed the idea. They did some research and settled on a travel trailer they could tow. They spent hours after hours scrolling options online — first looking at pre-owned units and then at new ones. The duo checked their calendars and saw a whole lot of nothing on the agenda for the rest of the summer.

“Finally, after all of this back and forth, we just thought, ‘Let’s do it,'” said Sherer, who lives near Omaha, Nebraska. “For us it made sense because it’s pretty much the only way to get out there and take a vacation right now without giving up something you really love.”

Ultimately, the Sherers ended up with a 23-foot Wolf Pup model from Forest River. It has an onboard bathroom and shower, a bunk bed for the kids, and more. The price tag: Roughly $17,000.

This Nebraska family certainly isn’t the only clan to join the ranks of RV owners during this pandemic.

Across the country, RVs are selling almost as quickly as Clorox wipes. Some dealers report long wait lists. Others report units flying off lots within hours of arrival from the factory. Put simply, the industry can barely keep up with demand.

To put this surge into context, look at the numbers. A recent report from the Reston, Virginia-based RV Industry Association indicated that wholesale shipments of RVs in June exceeded 40,000 — the highest total since October 2018.

The same report indicated that the monthly tally represented a 11% increase from the same time last year.

Monika Geraci, the organization’s senior manager of marketing strategy and operations, said these sales are driven by people like the Sherers — folks who want the freedom to travel, but also want to be able to control their environment and adhere to social distancing guidelines as they explore the country.

“Americans love the freedom of the outdoors, the enrichment that comes with living an active outdoor lifestyle, and the ability to go where you want, when you want,” Geraci wrote in a recent email.

“RVing also allows more control over your environment. RVers are able to sleep in their own (beds), use their own (bathrooms), bring groceries and cook their own meals, and control when, how, or if they are exposed to crowds. And RVing has always been a fun way to travel and connect with family.” 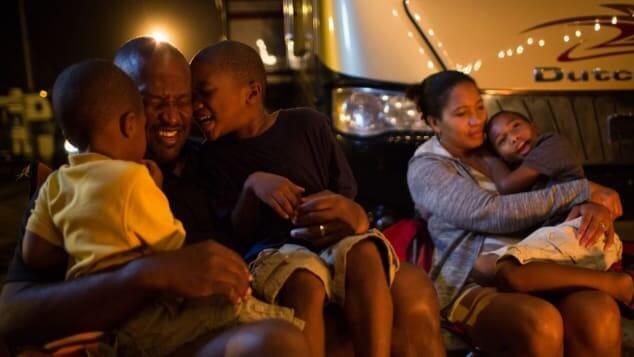 Anatomy Of A Surge

Perhaps the most notable aspect of the recent boom is how quickly it all happened; nearly all RV manufacturers and many RV dealers were closed from late March to early May, but as the country began to reopen RV sales accelerated like a Lamborghini.

RV Trader, for instance, an online classifieds website for buying and selling recreational vehicles, reported that visitor traffic for July 2020 was more than 80% higher than it was in July 2019.

Executive Vice President Paige Bouma said the site recorded 5.4 million unique visitors in June, the first time since the Norfolk, Virginia, company was founded in 1989 that it had passed the 5-million threshold.

“There are so many people asking or trying to figure out how to get into RVing right now,” Bouma said, noting that demand for rentals has been just as strong. “In addition to RVing being safer during the time of Covid, most vehicles have WiFi capabilities, which means they’re easy to park and set up as remote offices, too.”

Ken Goss is owner of Goss RV Motorcoach Sales, which sells some of the most high-end motorhomes, and he said his sales figures rose 211% between June 2019 and June 2020. 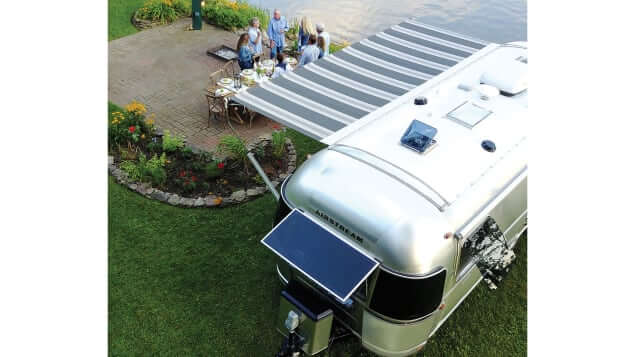 Live the luxe life with an Airstream trailer.

Bob Wheeler, CEO and president of Airstream, reported that his company set an all-time sales record for the month of May, then beat that record in June. As of press time, Airstream did not have data for July, but in mid-July, Wheeler predicted it likely would be just as strong.

“We have enough demand right now to carry us through for a long time,” said Wheeler, whose company is based in Jackson Center, Ohio. “Our goal now is building a foundation: We want to take these people who have come to the Airstream lifestyle because of the pandemic and turn them into lifetime Airstream buyers.”

You don’t need to be Adam Smith to understand that this kind of soaring demand necessitates consistent supply. Since factories reopened this spring, manufacturers have been churning out RVs at breakneck speed. There’s still a backlog.

For buyers, this has required patience. Some have had to wait weeks for their RV, complicating travel plans that already were postponed or rescheduled due to Covid. Others have had to travel simply to pick up their RV — essentially jumping head-first into their new lives as RV owners with epic road trips they’ll never forget.

The Sherers, for instance, found theirs on RVTrader.com and drove six hours to Minnesota to get it. 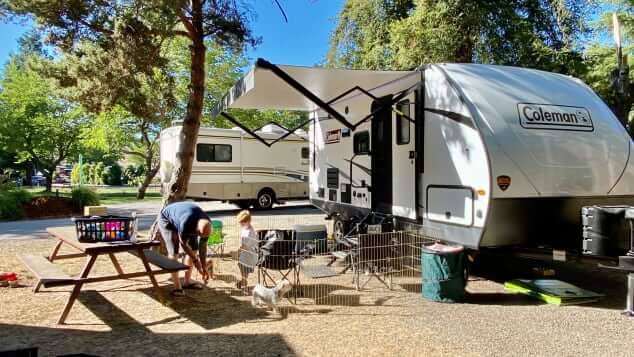 Shana Bull, a marketing consultant in Concord, California, also is a new RV owner. Like the Sherers, she and her husband had contemplated purchasing an RV for a while. When the coronavirus pandemic began, they felt an RV would be the safest way to travel with their 4-year-old son, who has cystic fibrosis and therefore has a compromised immune system.

One day in June, Bull and her husband visited a local Camping World to shop for RVs. The good news: They fell in love with a new 23-foot Coleman Light travel trailer for roughly $26,000. The bad news: The nearest one was 200 miles away.

“We knew exactly what we wanted and the nearest one was in Fresno,” she said. “So, we put $1,000 down to reserve it and a few days later (my husband) drove there, picked it up, and came back.”

What To Look For

Buying a new RV is a lot like buying a new car — the process is way more complicated than it might seem. New or preowned? Drive-aboard or trailer? Luxury or basic? These are all questions that the Bulls and Sherers asked themselves in the early stages of the process. They’re also questions that all new buyers need to ask.

Another key decision revolves around what type of RV to buy. According to the RVIA, there are several different options, including motorhomes, campervans, caravans (also known as travel trailers and camper trailers), fifth-wheel trailers, popup campers and truck campers.

Each of these RVs has pros and cons. Prices range from a few thousand dollars for a small pop-up trailer to millions of dollars for mansions on wheels.

“There truly is an RV for every lifestyle and price point,” Geraci wrote. At the end of her email she directed first-time buyers to a site the association has built to help simplify the process: GoRVing.com.

Travelers who decide to purchase something they can tow must address an entirely separate set of questions about the towing capacity of the vehicle with which they intend to tow it, and the need to invest in a tow hitch.

Many travelers are getting hitches when they buy new trucks. Mike Betts, test operations supervisor at Nissan Proving Ground in Stanfield, Arizona, said the sale of tow hitches at Nissan dealerships across North America has increased 20% from June of last year — a fact that means more people are buying trucks with the intention of towing something big.

Betts cited results of a recent survey commissioned by Nissan indicating that 28% of 1,004 survey respondents said they were considering getting a vehicle with towing capabilities at some point in the next three months.

“We can’t say for sure people are getting the hitches for RVs, but drive anywhere, and you see way more RVs and travel trailers on the road these days than ever before,” Betts noted. 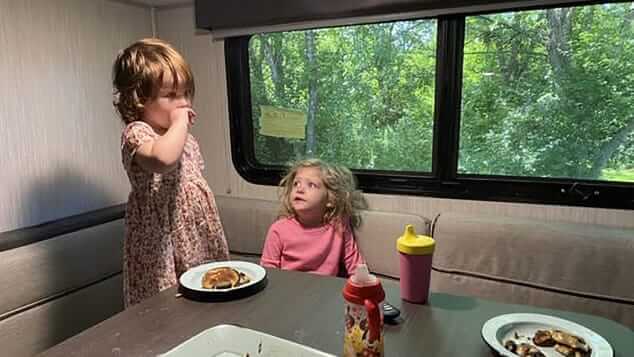 Learning On The Fly

Of course, once a family buys a new RV, they get to break it in by taking it on the road.

Bull, from California, started small — her family spent their maiden voyage at a KOA campground about 75 miles from their house, in Petaluma.

Overall, the family loved the trailer experience. The Bulls were able to bring their two small dogs, who are 18 and 17 years old and are very clingy. Their son loved collecting pine cones and lining them up on the steps. Bull noted that her husband took full advantage of the onboard kitchen and made tortillas for tacos one night.

“For us (RVing) was the perfect opportunity to get out of the house and do something new while feeling safe in our own home away from home,” she said.

This June, she and her husband bought a 27-foot Keystone Passport travel trailer and christened it with a 17-day road trip to Utah, Wyoming, Idaho, Montana and Arizona.

Together the duo and their two young daughters camped in national parks and explored the country between them. Every now and again the family even “boondocked,” which is what RV owners call it when they camp for the night in the middle of nowhere, or at a location without amenities hookups.

Moreau described the journey as “a real escape,” but noted that it wasn’t all unicorns and rainbows.

“At one point we got stuck on a road in the middle of nowhere and had to do a 27-point turn to get out,” she said with a chuckle. “It seems like part of this is accepting that you’re going to learn new lessons every time you go out.”

The Sherers, the family from Nebraska, certainly are up for learning lessons.

Michaela Sherer said she looks forward to taking advantage of the new ride as often as possible.

“Like everybody else, I’ve been stuck in my house with my kids for six months,” she said. “Any ability to use (this RV) to get a change of scenery at this point will be great.”

Previous Article Is ‘Road Schooling’ The Next Big Thing?
Next Article 2020 Fold Down Camping Trailers