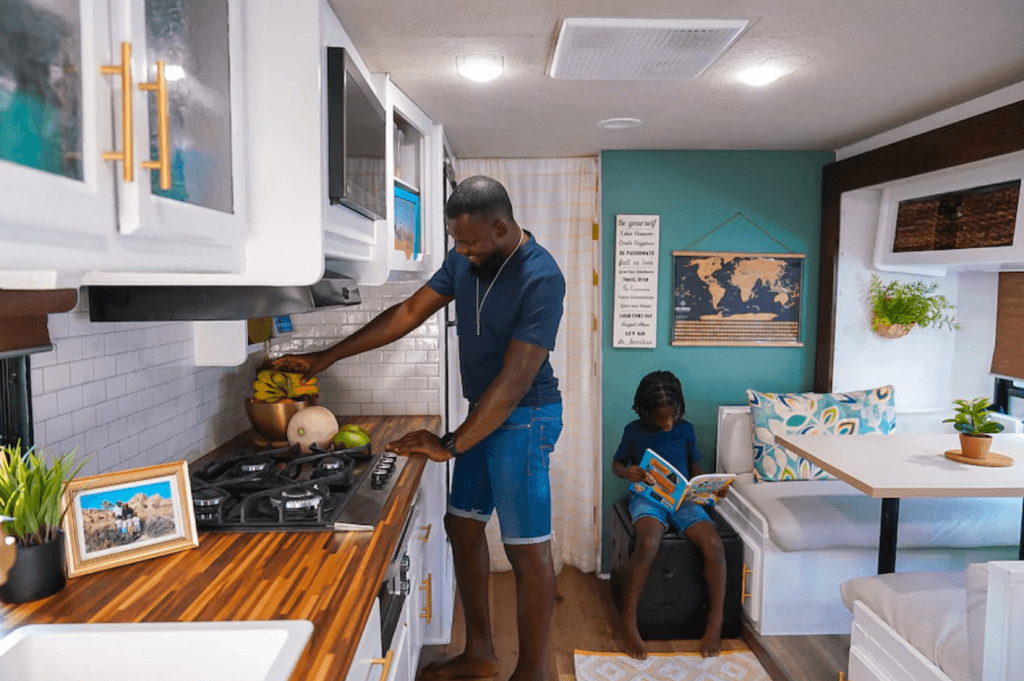 Karen and Sylvester Akpan describe their approach with their 7-year-old son, Aiden, as more “unschooling.” Whatever they encounter on the road in their RV dictates the day’s learning. (Photo credit: Akpan family)

When Paige Severance first told her husband, Chip, that she might want to spend the school year traveling the country and educating their five children in an RV, Chip looked at her and said, “You’re just under a lot of stress.”

Stress was definitely part of it. The novel coronavirus promised to complicate the already hectic logistics of having kids in three different schools. Paige, 40, wasn’t keen to home-school, until it occurred to her that with Chip, 39, working remotely as the owner of an IT services firm, the Knoxville, Tenn., family didn’t have to stay put. “I thought, ‘If I’m going to home-school, why not make the best of it and do some learning that is really hands on?’ ” said Paige, a stay-at-home mom. 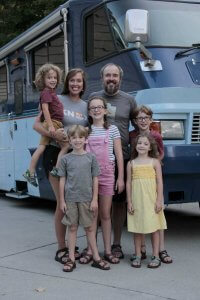 In June, Paige and Chip Severance bought a 1994 Foretravel Unihome and fitted it with bunk beds in preparation for the fall launch of an epic year-long road trip. Their kids — from left, Hank, 4; Jack, 6; Scout, 11; Rynn, 6; and Tate, 9 — will be “road-schooling.” (Family photo)

The children, ages 11, 9, 6, 6 and 4, were game. So in June the Severances bought a 1994 Foretravel Unihome and fitted it with bunk beds in preparation for the fall launch of an epic year-long road trip. First stop: Great Smoky Mountains National Park. Then: Who knows?

With about 1 in 4 Americans still working entirely from home as of August, and a record number of students remote learning or home schooling, the coronavirus has untethered families from the geographic ties of in-person school and work. That’s created an unusual opportunity to opt for a kind of mobile learning called “road schooling” (or “world schooling” in the international version). The coronavirus “has been an inflection point in a lot of ways,” says Jennie Germann Molz, a professor at College of the Holy Cross in Worcester, Mass., and the author of the forthcoming “The World Is Our Classroom: Extreme Parenting and the Rise of Worldschooling.” “With schools going virtual there has been a resurgence of interest in home schooling in general, and then people realize, ‘Gosh, we don’t have to be home to do it.’ ”

In 2014, when Molz, 51, and her husband, Martin, 52, took their then-10-year-old son out of traditional school for a year of travel to all seven continents, their choice to road-school was still considered extreme. Now Molz sees it becoming more mainstream among parents who don’t mind “taking a risky leap of faith to live a more fulfilling lifestyle than the one that’s served up by a consumerist suburban society.”

That was the motivation for Sandra and Julio Peña. Thinking “there has to be more to life” after they found themselves priced out of buying a house in boom-times Silicon Valley, Calif., they bought an RV in 2017. They’ve been road schooling with their four children, ages 10, 8, 5 and 3, ever since, using a mix of purchased workbooks, free learning apps and websites. It’s an approach that Sandra, 38, describes as “eclectic unschooling,” but she plans to add some more structure this year with a paid curriculum like Time4Learning. 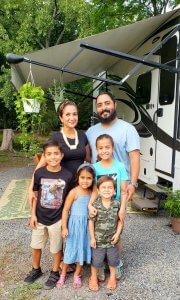 Sandra and Julio Peña bought an RV in 2017 and have been road-schooling with their four children, ages 10, 8, 5 and 3, ever since, using a mix of purchased workbooks, free learning apps and websites. (Family photo)

Coronavirus restrictions led to a stay of several weeks in a rural campground in South Carolina. Typically, though, the Peñas flit from town to town across the United States, snapping up vintage jewelry to resell in the Etsy shop they run as the family business, and relying on what they encounter to inspire the kids’ studies. One recent day in Maine, Sandra led her brood to a hiking trail, where they foraged enough mushrooms to inspire both a day-long conversation and dinner. “You don’t know what to expect,” she said, “but I think life should be exciting like that.”

When Haley and Chad Ollinger sold their house and aviation business in Dumas, Tex., and moved last year into a decommissioned school bus — aptly named Skoolie — they decided to keep school plans simple for their four kids, ages 11, 9, 4 and 2. The goal: Learn something new every day, whether by making a GoPro skateboarding video, writing a song or helping their dad weld a part onto the bus. As a result, they say, the kids are happier than they were rushing from public school to after-school sports to homework sessions. “We were running in so many different directions it was hard to make time for one another,” said Haley, 33. “Their eyes are open to new things all the time, and I just think they’re just different kids. They get to be themselves. They don’t have to fit a mold of what public school wants.”

Although they rely on a purchased language arts curriculum, and their kids do math online, on the road the Ollingers prioritize visits to national parks or science museums. On a three-month stint at Chad’s family ranch in Utah to film a documentary series for the Discovery Channel, they found a paleontology dig so the kids could see real dinosaur bones in the ground. “We definitely try to use our surroundings to teach them,” said Haley. The coronavirus scratched the family’s plans to head to California, but they’re still hoping to spend six weeks in Mexico this fall, so “we’re really focusing on Spanish, just basic phrases, stuff like that,” said Chad, 35.

The coronavirus has led to boom times for the RV industry, with an estimated 53 percent increase in sales this July compared with last year. Marcus Lemonis, chief executive of Camping World, said the company has seen the average age of its customers drop from 50 to 38. That’s led Camping World to develop a bespoke road schooling curriculum for its customers, set to debut late this year. “We’re probably going to end up investing $2 million in this platform,” said Lemonis, who also points to tech upgrades, such as WiFi hot spots and solar panels, as a way to keep kids learning on the road. 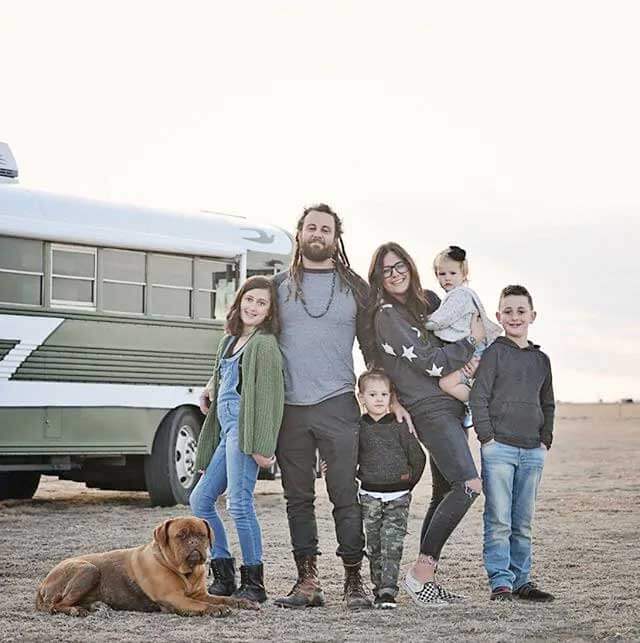 Haley and Chad Ollinger moved into a decommissioned school bus last year and began road-schooling with their kids, from left, Lillie, 11; Finn, 4; Hazie, 2; and Hutch, 9. (Dog Scooter’s along for the ride, too.) (Kathy Speck)

Camping World has even filed a claim to trademark the term “roadschooling,” suggesting that it expects to see more families combining long-term travel with learning. “This isn’t summer camp forever,” Lemonis said. 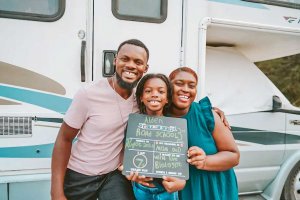 Seasoned international travelers, the Akpans left their home in Los Angeles for an RV in the early days of the pandemic. (Family photo)

Sometimes it feels like it, though. Karen and Sylvester Akpan describe their approach with their 7-year-old son, Aidan, as more “unschooling.” “He decides what he wants to learn,” said Karen, 31, a freelance writer who works with her husband, 42, creating travel content for brands on social media. “I follow his path.” No curriculum, no online learning (unless Aiden wants to take a class like coding or acting), no tests. Whatever they encounter on the road in their Fleetwood Tioga dictates the day’s learning. “Yesterday [in Montana], we saw a snake and we had a whole lesson on snakes — what they eat, where they live.”

Idyllic as it sounds, road schooling has its challenges, and not just the logistics of squeezing seven people into 250 square feet. There are kids who get homesick for friends, miss the chance to play a team sport or have to abandon extracurricular classes like music lessons. It gets even harder with teenagers because adolescents typically crave more privacy, and they want to establish an identity with a peer group rather than with their family. “The teenage years are definitely a topic of intense debate in this community,” said Molz.

There’s also the question of money. Though the Severances were able to kit out a secondhand RV for less than $40,000, a new Class A RV — the largest on the market — can cost well over $100,000. Road schooling is still typically accessible only to parents with cash to spare, who can run a business or work remotely from the road. During the pandemic it’s an escape from the woes of traditional schools, but only to families who can afford it.

“I think it’s a way of reproducing and maintaining middle-class privilege in ways that exclude people that don’t have resources to do it,” said Molz. But for Sandra and Julio Peña, it was a way to marshal their resources into a bigger life outside pricey Northern California. “It was either this or a two-bedroom apartment for $4,000,” said Sandra. “We can still do what we were doing, but much cheaper. From our little business that we do to cover our overhead, we’re living it up.”

Demographically, road-schoolers tend to be White, middle class, mostly heterosexual nuclear families. The homogeneity of the lifestyle can make Black families like the Akpans feel like outsiders. Seasoned international travelers, they left their home in Los Angeles for an RV four months ago, in the early days of the pandemic. “To be honest, we have not come across any Black families at an RV park since we left,” said Karen. “Even though a lot of Black families want to RV, they have that fear, ‘Will I be accepted here, will I be safe here?’ ”

Although coronavirus restrictions have altered their travel this year, the Peñas typically flit from town to town across the United States. (Family photo)

For Sandra Peña, learning to deal with racism is another part of the road-school curriculum. “We’re a brown family, so we sometimes show up somewhere and we don’t get received the way [we hope to]. The kids have questions. Especially with everything that’s happening, we’ve had some serious, tough conversations.” But, she adds, their experience has taught them that in most communities, welcoming people live right alongside the racist ones.

As Paige Severance cobbles together a curriculum for home schooling in the RV, she’s stocked up on children’s books by Indigenous and minority authors; when they travel through areas rich in Native American and Black history, the children will read stories that teach them more about the location. “This is going to be a different kind of home schooling,” she said, “one that I’m actually looking forward to.”

Written by Melody Warnick for the Washington Post, October 5, 2020

Previous Article How Go RVing Evolved Its Marketing Strategy
Next Article Is Buying An RV Worth It?