Sometimes, the greatest innovations are born out of lessons learned – and that is certainly true for P.J. Tezza, creator of the ModVan.

Tezza’s journey to invention began when his kids left home, and he and his wife, Laurie, planned a month-long road trip. They decided an RV presented a great opportunity for their adventure, so they purchased a used 26-foot Class C motorhome.

The trip was a huge success.

“We loved it!” Tezza says. “We liked being able to take our dogs, camp out on Forest Service roads, and go wherever we wanted without making hotel reservations.”

Trouble began, however, when the couple returned home to Berkeley, Calif. Dotting the landscape in this community along the east shore of San Francisco Bay is a sea of super hilly and curvy roadways.

“Driving a 26-foot RV is challenging in that environment,” Tezza says. “We only had street parking, too, and our RV was so big, it eclipsed the entire house when we parked in front of it.”

The couple eventually paid to park their RV elsewhere. However, that wasn’t practical. The lot where they kept the motorhome was some distance away, making it hard to grab it quickly for a weekend getaway.

That is when Tezza began dreaming of a better option.

“I liked RVing, but I wanted something significantly smaller, and lighter weight. But nobody made what I wanted.”

So, Tezza contracted with a custom outfitter to do a camper- van conversion. The appointment was a year away, but Tezza bought the van immediately.

In the months that followed, it sat in the driveway until Tezza began converting it himself. He installed a bed, built cabinets, and added mini-van seats, among other features. In the end, he had crafted a modular camper van that allowed him to add and remove pieces as he saw fit.

Since that time, Tezza and his wife have launched a business around their modern camper van with pop-up top. ModVans, based in Ventura, Calif., sells the ModVan CV1 – a full-featured camper van, family van and work van in one – directly to consumers, with plans to add a dealer network down the road.

The concept seems to be catching on. During The Reveal at RVX: The RV Experience, the ModVan CV1 took spotlight honors in the Van Life category, recognized by judges for its modular design, affordability, driveability and serviceability.

Notably, the upstart ModVan was up against many established competitors, including the Winnebago Revel, Winnebago Travato Pure 3, Leisure Vans 2019 Wonder Rear Twin Bed, and the Coachman Galleria 24 A.

“I was surprised by the honor,” Tezza says. “But I applied because I knew based on the research I had done, the CV1 was unlike anything else out there.” 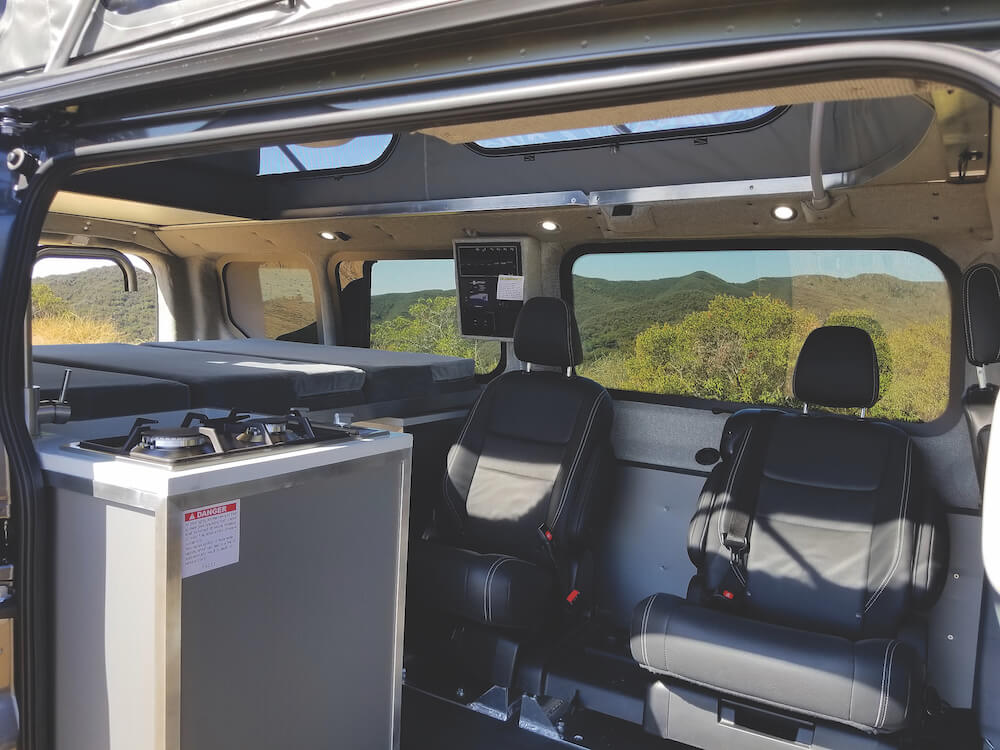 The ModVan floorplan offers plenty of options, as users can install the CV1’s removable second-row seats in two different configurations.

Why the CV1 Stands Out

At first blush, it may not be what immediately comes to mind when people think of an RV or camper.

It is a cargo van with a V6 fuel-efficient engine equipped with RV components. It drives like the family SUV or minivan. And though it’s not as large as the 26-foot Class C the Tezza’s started out with, it offers ample room for up to five passengers. It also can be customized; users have a choice of exterior paint colors, leather seat colors, cabinet trim and wall upholstery. The base for the CV1 is the Ford Transit T350 full-size van, which offers a modern spaceframe-based chassis and a high-tech, twin-turbo, direct-injection engine. Tezza says the Transit is easy to drive, gets good gas mileage and is easy to park, and it can be serviced anywhere Ford vehicles are maintained.

The floorplan offers plenty of options, too. The CV1 features ample storage, heating and electrical features and a pop-up rooftop. It also has a bathroom area, a kitchen and several sleeping options. In fact, the floorplan offers bedding areas for up to two children and four adults.

In addition, users can install the CV1’s removable second-row seats in two different configurations. In “camp mode”, the seats attach to the driver’s wall to maximize space inside. In “transit mode”, the seats install facing forward, like in a minivan or SUV, to maximize passenger comfort.

The pop-up top is made with vacuum-infusion composite sandwich panel, which makes it lightweight but also super strong. The cabinets are constructed of aluminum and plastic, and have a “clean, Apple iPhone store look,” according to Tezza. They can be bolted to the vehicle with removable fasteners.

“The end result is very strong cabinets that hold up well; I took these cabinets in and out of my prototype vehicle more than 200 times,” Tezza says.

Other notable features on this camper van include: a space-frame chassis with a chassis generator that has a 2,000-watt pure sine wave inverter; a 10,000-BTU rooftop air-conditioning unit; a 14,000-BTU externally-mounted propane furnace; a 1,500- watt electric heater; a 300-watt solar power charging system; a 3-cubic-foot refrigerator; a 6-gallon blackwater system as well as a 10-gallon gray water system and a 10-gallon fresh water system; a Bluetooth stereo with LCD display, backup camera, Apple CarPlay and Android Auto; an LED lighting system; and an available high-grain 4G LET cellphone booster.

Because weight is always a concern with an RV, Tezza says he weighs every CV1 before and after conversion. The entire weight of the CV1 averages 1,100 pounds. He reports he did the same exercise with a competitive product, and it came in at 3,700 pounds.

And while the pop-up rooftop is permanent, CV1’s beds are removable, as are its leather captain’s chair-type passenger seats and its cabinets, offering users a fully modular design. The design puts the furnace, water heater and inverter underneath the van floor, so once the items inside are removed, users are left with an empty cargo van.

“There are no other RV manufacturers offering a modular conversion like this,” Tezza says. “The CV1 can be used for camping, but it also can be used to drive your kids to soccer matches, as a cargo hauler and for other work-related tasks.”

Tezza says he drove his prototype unit for three years of real-world testing.

“It was my daily driver,” he says. “At 20 feet long, it fit into regular parking spaces. I even could do street parking. I used it to pick up supplies, such as 4-feet by 8-feet pieces of plywood. It’s great for surfing because I can put a long board in it. I have an outdoor shower, which has hot water. And then, I also use it for camping.” 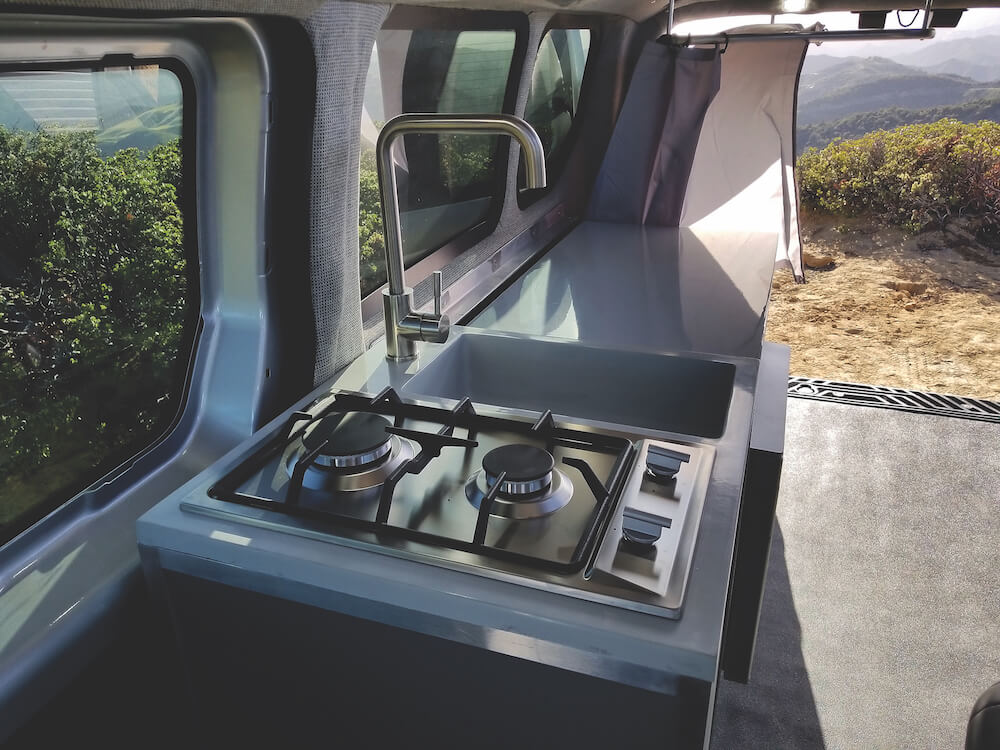 The ModVan floorplan offers plenty of options, as users can install the CV1’s removable second-row seats in two different configurations.

All the Benefits of an RV

For Tezza and his wife, building one-off, completely customized vehicles like their original prototype was not what they wanted. Instead, they sought to create and manufacture a consistent product, so they built a website to promote the product, which they say generated tremendous response from potential customers.

Tezza says he quickly realized if he could pre-sell five units, they could build the business and hire employees (the company currently has seven full-time and one part-time employee).

“We sold 10 really quickly without spending any money on advertising, and that’s what got me into building ModVans,” he says.

As he tested the waters, Tezza says he always knew he wanted ModVan to be a certified RV manufacturer to give customers access to RV financing and extended warranties, RV insurance and the like. ModVan has since obtained all the certifications required to be listed as an RV manufacturer and has become a member of the RV Industry Association.

Every ModVan comes with a two-year warranty for the conversion, and a manufacturer’s warranty for all appliances according to each manufacturer, which is generally between one to two years. However, because the unit is an RV, customers also have access to an extended warranty of up to seven years, which allows them to get the vehicle serviced by any dealer on that warranty network, according to Tezza.

Because the ModVan can be used for dual purposes, and is listed as an RV, Tezza says the product makes for a compelling story.

“We sell this as an RV, which means you can finance it as an RV,” he says. “That means you can get a 20-year loan and write off the interest as a second mortgage, and you have access to RV insurance, which is far less expensive than car insurance.”

Meanwhile, the vehicle fits in a garage, so consumers save money because it doesn’t need to be stored like many larger motorhomes do.

“You could even use it as a vehicle you drive every day, instead of another vehicle, and it’s a lot less expensive than buying a second minivan, SUV or pickup truck, and an RV,” Tezza says. 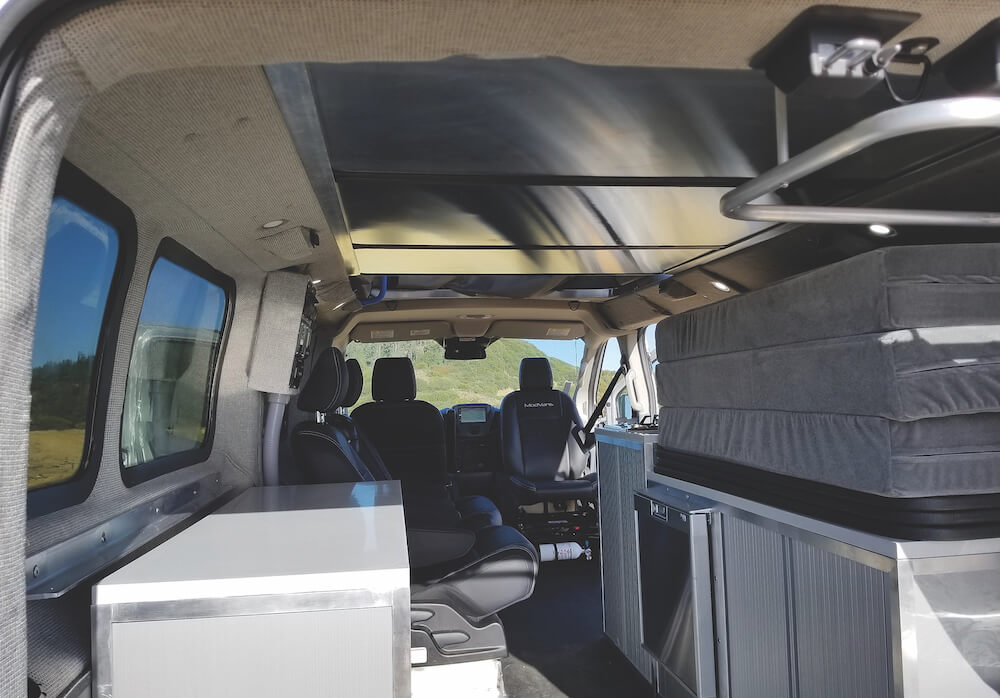 Looking Toward the Future

The company currently produces CV1s out of a small industrial warehouse in Ventura, Calif. The vans are sold direct to consumers, and mostly on the Internet, but Tezza sees a day when the company will form a dealer network.

Currently, Tezza says there is a year wait for a ModVan. The company has two teams building the vans: one team manufactures the cabinets and the lift mechanism, and the other team assembles the vehicle. It takes just two weeks to assemble the vehicle, but manufacturing the parts takes much longer.

“We are doing everything in our power to expand as fast as we can, but it’s capital intensive,” Tezza says. “Our goal is to get back to our design objective, which is four months. So, four months after you place your order, you receive your van. But that’s going to require us to expand production. We’ve sold 40 vans and have delivered 10.”

Tezza predicts that by the 2020 buying season, ModVan will have this sorted out, and start to sell to dealers in the spring of 2020. “We are spending this time looking into how many orders we can take, how we can expand our production capacity, and how many RVs we could have ready by 2020,” he says.

Meanwhile, Tezza predicts the future is bright for vehicles like the CV1 – multipurpose vehicles that are smaller and more efficient, are focused on user experiences, and appeal to a wider audience than the typical RV.

“The RV industry is a $50 billion industry, but the CV1 isn’t actually competing in that number. Most of the people we sell our camper vans to are not interested in buying an RV; they are put off by them,” he says. “What we’re talking about here is way bigger. It’s the $500 billion market currently represented by minivans, SUVs and pickups.

“We’re adding to the RV market rather than trying to compete with other manufacturers for a piece of the pie,” he adds. “We’re trying to add … to the pie.”