Travel Trailers
Comments are off

A unique experiment mixing capitalism within a religious and socialistic culture is unfolding on the plains of southeast South Dakota, where a colony of Hutterites is seeking to help sustain their community of 140 followers by manufacturing TrailManor collapsible folding trailers.

The TrailManor brand, established in 1983, was once a successful Tennessee-based product, but fell on hard times since the onset of the Great Recession.

In June 2017, the Old Elm Spring Hutterite Colony, based in Parkston, S.D., stepped in to take over the RV manufacturer. They incorporated under the name TM Industries and moved production from Hartington, Neb., to a 36,000-square-foot metal fabricating facility in a neighboring colony.

TrailManor’s CEO is Paul Wipf, 61, who was raised in a Hutterite Colony but left with his family when he was 15 years old. Paul’s older brother, Joseph Wipf, heads the Old Elm Spring colony and hired his younger brother to run the RV manufacturer. 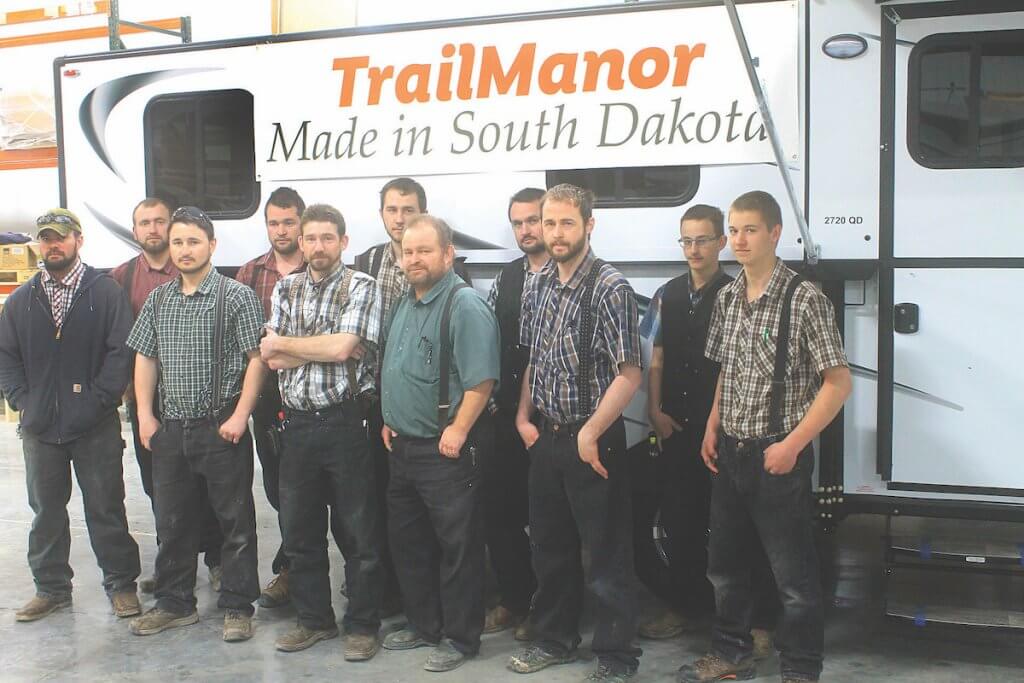 To get traction in the marketplace, the Wipfs know they and their handful of dealers will have to do a good job explaining the special attributes of TrailManor models, which combine the best elements of a lightweight pop-up and a traditional hard-side trailer.

That combination is made possible thanks to the trailers’ unique power lift technology: Eight torsion bars permit the trailer – which is a bit less than 80 inches tall when collapsed – to expand to 116 inches for camping.

Thanks to a TrailManor’s low profile, combined with a trailer weight of less than 4,000 pounds, it can be towed with a properly equipped minivan, crossover or SUV, according to Wipf. Meanwhile, while setting up some pop-ups can be akin to assembling a complex tent, Wipf says a TrailManor can typically be set up in about two minutes.

And like traditional travel trailers, TrailManor models (there are three, each available in three different floorplans) are self-contained and equipped with most common features found in standard models.

As an added bonus, TrailManor trailers feature a swing-away hitch, allowing storage in a standard garage. 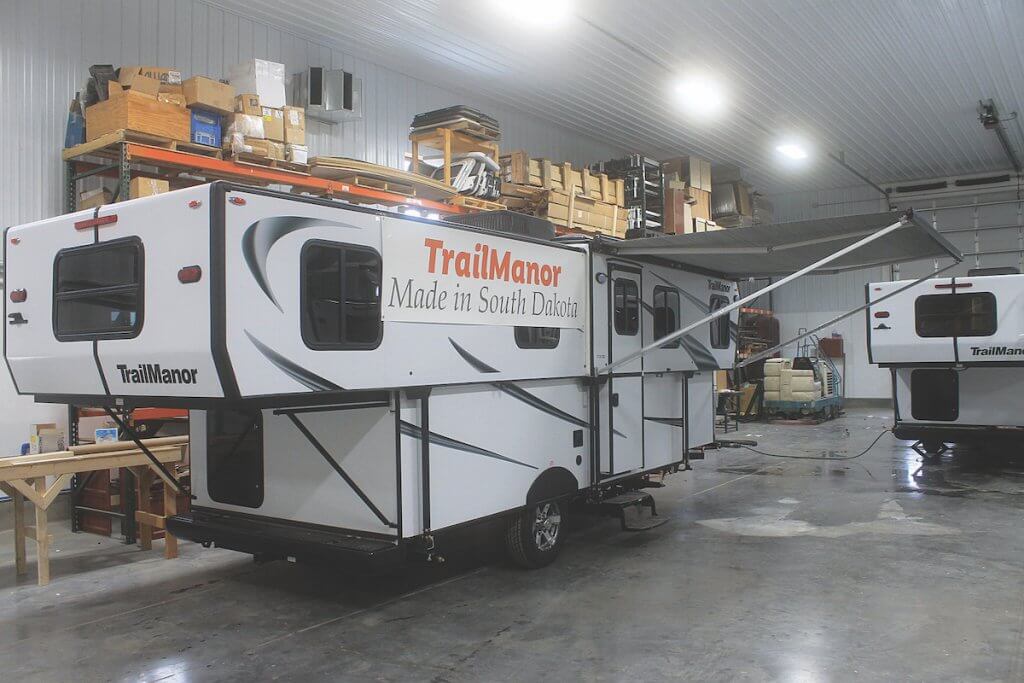 TrailManor trailers are hard-sided pop-ups. Thanks to a set of torsion bars built into the trailer, the two upper portions can be lifted with one hand and the entire operation can be completed in about two minutes.

TrailManor’s transition to new ownership, management and production has been slow, Wipf concedes. Securing many key components from suppliers was initially a challenge, and the company’s new ownership also faced some hurdles because the brand had been out of consumers’ sight for nearly four years.

As a result, sales in 2018 were lackluster. This year, however, Wipf and his sales manager, Bob Eickhoff, see more promising signs after attending several consumer shows, where the manufacturer sold some units and where the distinctive trailers piqued the interest of many consumers – once they understood how the units work.

“We’re basically finding the consumer likes the product; they’re excited about it,” he says. “They’re impressed with the product. It’s a niche product.”

One factor in the company’s favor: The brand has some very dedicated owners. In fact, TrailManor owners started the TrailBlazers Club in 1993 and it remains an enthusiastic group with 10 chapters or groups scattered across the U.S. and Canada.

The 2018 Jubilee was held in Nashville, Tenn. 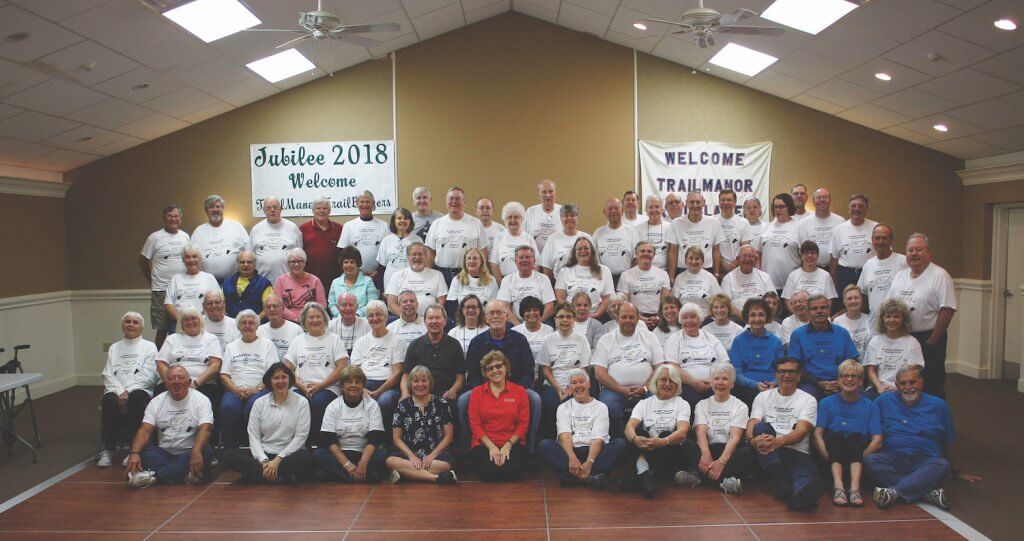 Long before the company was sold to the Hutterite Colony, consumers who fell in love with TrailManor’s products started the TrailBlazers Club, which has 10 chapters in the U.S. and Canada. TrailBlazers gather every three years for a Jubilee featuring all clubs.

While many RVers appreciate the benefits of a traditional trailer/ pop-up hybrid, that unique feature comes at a cost, with MSRPs on the largest TrailManor models coming in as high as $44,000. (For comparison sake, more than 90 percent of pop-ups retailed for $20,000 or less in 2018, according to market data firm Statistical Surveys.)

The higher price of TrailManor trailers can cause an element of sticker shock, Wipf concedes, while also noting TrailManor is a premium product. He also says that, moving forward, TrailManor is actively working to reduce costs while keeping the design and features customers want.

“We’re trying to modify the trailer as we go forward and taking costs out,” he says. “We’re confident going forward that what we saw at the retail shows the last two to three months proves it’s a viable product.”

At the time of publication, TrailManor had a far-flung dealer body comprised of just six dealers spread across the country.

“I would like to get six to eight more dealers,” Wipf says. “I would love to have two on the East Coast, one in Florida, one in Arizona and one on the West Coast, between Oregon and L.A.”

Wipf says dealers want to see TrailManor get a better acceptance from the retail public before signing on as dealer partners.

“The dealer needs to know whether TrailManor will be there for them in three to four years,” he acknowledges.

“Dealers need to be certain how a TrailManor works. Some of our dealers are kind of familiar with the trailer, but they haven’t kept up to date. There has been no one educating them (on set up),” he says. “As we sign up new dealers, we’ll have to go out and teach them how the torsion system works and how the basic system operates. It’s a simple task.”

Wipf concedes he’s been on a steep learning curve since he took over management in 2017.

“We were afraid to make any changes, so we kept everything the same. When you looked at our first five or six trailers, they looked kind of blah. I can laugh at it now but, honestly, I thought they looked terrible,” he says. “We then did some major changes in cabinetry and the interiors, but it still wasn’t good enough. It wasn’t quite what we were looking for.”

Wipf is always looking for ways to cut costs and build efficiencies into the plant.

He had an epiphany during a visit to Elkhart County over the winter.

“We were outsourcing all of our cabinetry, but our trip to Elkhart convinced me there is a cheaper and lighter way to do it so we brought all the cabinet work inside,” he says.

Cabinetry now joins a list of in-house production that includes all latches and hinges, seating, window curtains and valances and all fabricated metal tubing.

Meanwhile, visits to retail shows in Alabama, Tennessee and Wisconsin also whetted his appetite for innovation.

“It opened our eyes. We asked ourselves, ‘Why aren’t we doing this?’” Wipf recalls. “We saw a lot of great ideas. We don’t have to copy them, but at least we learned something.”

By April, he had sent out his pricing list for 2020 models, which feature all-new Furrion appliances, new curtains and seating material. Meanwhile, Wipf said he’s designing a 24-foot model that could weigh less than 3,000 pounds. 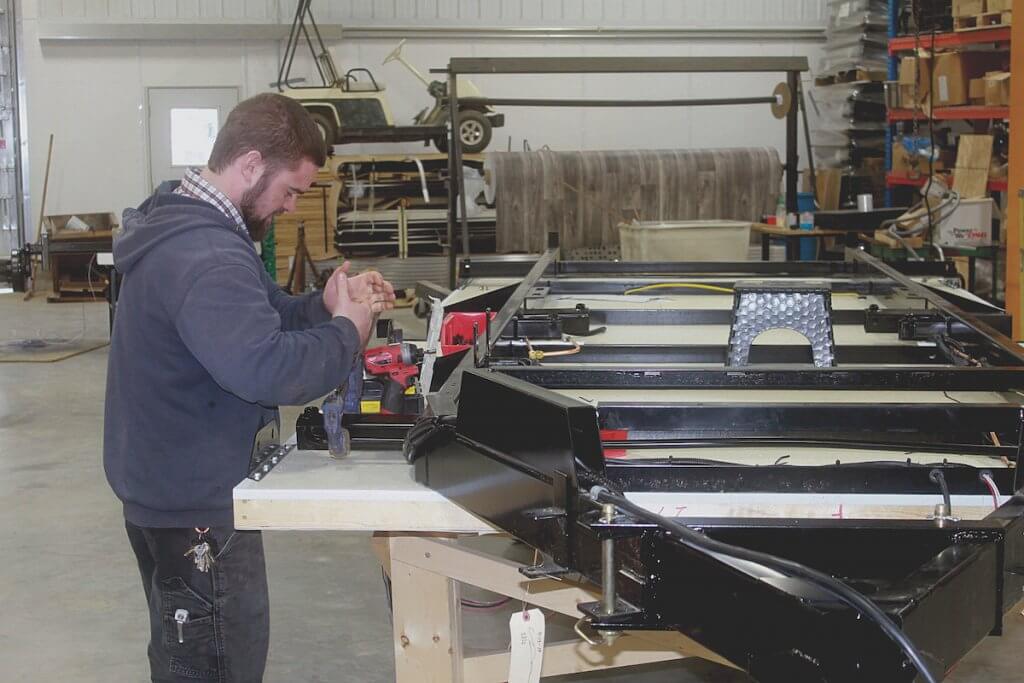 Tim Wipf works on the frame of a TrailManor trailer at the Old Elm Spring Colony’s plant in Parkston, S.D.

In February, TrailManor’s workforce of 14 was producing around six units per month. The company’s short-term goal was 12 units per month. Wipf was searching for six additional workers to help meet production goals.

“For this company to be profitable, they would have to get to one a day. The owners think we can get to one a day in this facility and, hopefully, with the right amount of labor, we can,” he says. “It will take streamlining our logistics. Right now, we’re small enough that to all the major component manufacturers we’re nothing but a stepchild. … Once we get to where I write a purchase order for 50 to 60 units, it will change the whole outlook.”

TrailManor’s position as an investment by a Hutterite colony creates a unique situation unlike any other RV OEM.

“The ownership didn’t get into this as a hobby,” Wipf says. “Long term, they will make money.”

However, under Hutterite ownership, there are some limitations. For one, all employees must come from the Hutterite Colony. Secondly, it is almost impossible to fire a worker, and anyone who leaves the workforce must be replaced with another Hutterite from a very finite labor pool. In contrast, northern Indiana OEMs, for all their stress in finding workers, don’t face such a unique labor challenge.

Still, Wipf says he believes he can reach that 12-unit-a-month target.

So, what if TrailManor takes off and demand outstrips the company’s current production facilities?

“When TrailManor starts taking off – and I believe it will – they will have to make a major decision whether I can get another 40 or 50 people in there,” says Wipf. “It doesn’t take long to put up a building. I don’t see that as an issue right now, but it would be a major mistake, if the demand is there, not to address it.”