(CNN) — Visit Caño Cristales during the wet or dry seasons in Colombia, and you’d be forgiven for wondering what all the fuss is about.

However, travel there from June to November, the moderate months between the extremes of the wet and dry seasons, and you’ll witness one of Mother Nature’s crowning glories.

The 62.1 mile-long river is in Colombia’s Serranía de la Macarena national park, in the province of Meta, and is known as the “River of Five Colors.”

This “liquid rainbow” — as it is also called — is one of the South American country’s most spectacular natural wonders, thanks to its vivid colors.

The bed of the river sports bright red, yellow, green, blue and black for the few months that conditions are right. Although the colors can be viewed from as early as mid-May and sometimes into December, they are brightest during June and November.

The colors are produced during the reproductive process of the aquatic plants in the river, which are called Macarenia clavigera, a species of the riverweed family Podostemaceae.

During the wet season, the river runs fast and high, meaning sun cannot hit the riverbed’s plants. During the dry season, there is not enough water to support the plants. The seasons rarely vary, so visitors wanting to catch sight of the spectacle have to head to the national park during those months that the bloom is most visible.

The phenomenon happens nowhere else in the world. The area itself is a hotspot for biodiversity, where the Andes mountains and the Amazon and Orinoco basins converge — and is home to many endemic species. 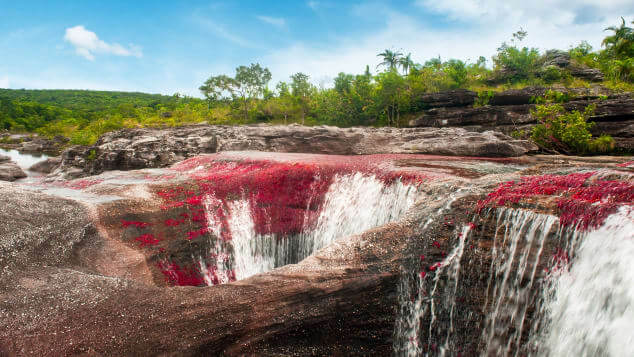 Hundreds of thousands of tourists flock to see the spectacle every year, which has raised concerns amongst scientists that the river may be threatened by overtourism.

But Flavia Santoro, head of ProColombia, the country’s tourism board, says measures have been taken to protect the area.

“We have severely restricted development of tourism infrastructure,” Santoro told CNN Travel. “And the tours that are available in the park are exclusively run by local people.”

There are designated swimming areas in the river; however, visitors are not allowed to swim wearing sun lotion or bug spray, as the plants are sensitive to the products’ chemicals. The tourism board has also imposed a cap on tourists visiting the river, with only 200 people allowed in per day, in groups no larger than seven.

ProColombia also specifically promotes environmentally focused accommodation, such as the Wayabero Lodge, which promotes the conservation of the ecosystems and the development of sustainability programs for local communities.

Not only do tourists travel to see the river, but the abundance of wildlife is a draw for the crowds. Turtles, iguanas and aguilas — Colombia’s national bird — are just some of the local species that can be spotted in the Serranía de la Macarena national park, home to more than 400 bird species.

For decades, tourists — even Colombian ones — stayed away from Caño Cristales as it was in a region controlled by FARC guerrillas. However, following the peace accord signed in 2016, the area has opened up to international tourism. The town of La Macarena, and its surrounding areas, is controlled by the military, and is mostly safe for visitors.

Colombia is experiencing a boom in tourism, with the country seeing visitor numbers grow by 38% between 2017 and 2018, according to figures from the Ministry of Commerce, Industry and Tourism.

More than 15,000 tourists visited Caño Cristales in 2017, and ProColombia expects the number of to continue to grow, meaning ecotourism policies to protect the region are all the more important.

Carlos A. Lasso, senior researcher at the Humboldt Institute, a Colombian body in charge of the nation’s biodiversity, said the growth in tourists was not worrying — yet.

“The challenge will be to not exceed the ecosystem’s capacity for visitors. It is a difficult area to protect, as it is so far from any city. Despite the signing of the peace agreement, there are still some security problems in the area, which add to the issue.”

But threats to the area do not just come from overtourism. A plan in 2017 to drill for oil more than 40 miles away from the site was rejected by then-president Juan Manuel Santos over fears the river would be adversely affected. The battle, between the government and the Texas oil company, has now headed to court.

“Although the government is doing well, there is always room for improvement,” Lasso said. “More park rangers and officials to protect the area, and most importantly, stopping deforestation, which is advancing in the region at an alarming rate.”

Deforestation is one of Colombia’s most pressing problems, with more than 40 soccer fields worth of trees logged every day, and the area of La Macarena is no exception.

Deforestation affects the patterns of rainfall, and the area has seen less rain, meaning the water of Caño Cristales would turn from clear to a murky brown — causing the Macarenia clavigera to become extinct.

However, Lasso is hopeful. “More young Colombians are learning about the environment, and how to preserve it.”

And, Lasso added, as Caño Cristales brings in much needed money to the region, there’s all the more reason to protect it.

Although it is possible to visit the river without booking through an agency, you cannot visit without a government-licensed tour guide. Permits to visit the park can be applied for in advance via the National Parks Office. There is a cap on the number of visitors allowed per day, and the majority of the permits are allocated to tour agencies.

It’s much easier to book through an agency. Viator’s three-day tour from Bogotá starts at $750 and includes riverside picnics and airfare, or The Colombian Way is an in-country tour guide with great local knowledge and starts at $635.

Most tours range from two to four days and will take you to other areas of the park, which are well worth seeing. The closest town to Caño Cristales is La Macarena. It’s not possible to camp within the park, so visitors have to “commute” from the town, which has basic accommodations.

Make sure you bring plenty of cash — the town only has one ATM, and it’s temperamental. You’ll need your yellow fever vaccination, as occasionally visitors are asked to show their certificate at La Macarena airport, and don’t forget: you’ll also need to take anti-malaria tablets.

*RT Staff: If you do indeed travel to this spectacular earthly site, remember: leave no footprint. Respect the culture, the ecosystem, and the wildlife.  Enjoy the beauty.

Previous Article This Unexpected Travel Trend Is Especially Popular Among Women Right Now
Next Article New Teardrop Trailers: You And The Open Road