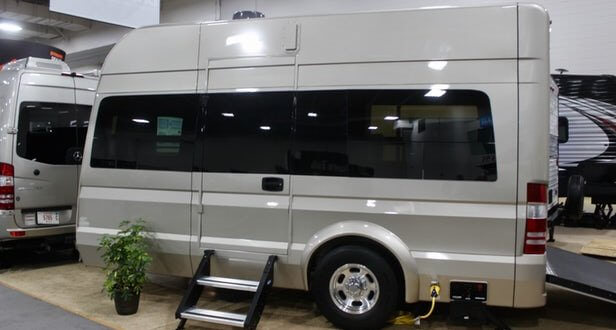 The bulk of vehicles on display at the inaugural RVX show that wrapped up on Thursday were the type of huge, stretched Type A motorhomes and fifth-wheel trailers that notoriously dominate American hookup campsites and RV dealerships. But innovative small RVs like the SylvanSport Vast also filled out some of the show floor. Another impressive trailer in the under-23-foot (7-m) range was the Trail Wagon from Chinook. More than just tow-vehicle-matched wheels, this entire trailer matches the Mercedes Sprinter camper van it rides behind. It also features a versatile toy hauler/camping trailer layout controlled via smartphone app and enough space to carry a side-by-side or Smart car.

Readers who who know a thing or two about older motorhomes will undoubtedly recognize the Chinook name. In fact, the brand spent decades of last century establishing its reputation for luxurious, innovative campers. As Tin Can Tourists’ detailed historical breakdown explains, Chinook got its start as one of the earliest American motorhome brands in 1938, founded in California by Sy and Rose Mair. From humble beginnings, it went on to serve as an important player in the growth and evolution of the US RV industry over the seven decades that followed.

During its run, Chinook produced various types of RVs, from truck campers, to trailers, to camper vans, moving to Washington State and soldiering onward through a variety of ownership and structural changes. Some highlights during that run included the bus-like Mobilodge Class As from the 1960s, the Toyota-Chinook pop-ups from the 1970s, the Chevy Blazer-based Chalet from that same era, a specially prepared Concourse camper that set a motorhome land speed record just under 100 mph (161 km/h) in 1998, and a ruggedized Baja 4×4 motorhome that went rallying in the middle of winter a couple years later. Chinook’s was quite a fascinating story, and the company’s “sports car of motorhomes” billing only added to the intrigue.

Still, business took a marked turn for the worse in the early 21st century, and by 2005, Chinook shuttered its doors. It lay dormant for the better part of a decade before Phil Rizzio, an entrepreneur with a small family of RV dealerships, purchased the Chinook intellectual property rights, molds and equipment. Rizzio headquartered the revived Chinook in the world capital of RVs, Elkhart, Indiana, and began rolling out new camper vans in 2015. Chinook now offers three individual Mercedes Sprinter-based camper vans and is growing its lineup of trailers. 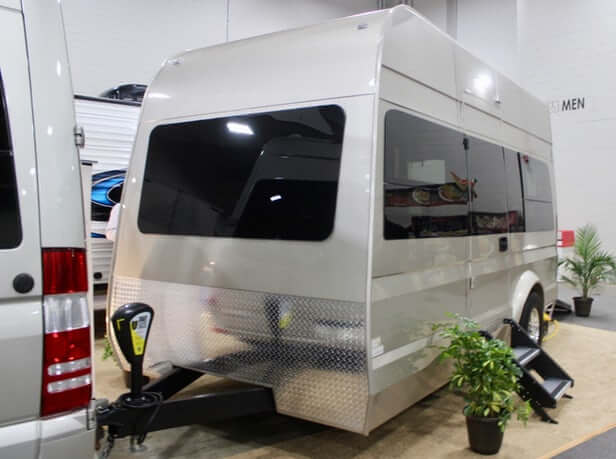 That about brings us up to today … or at least yesterday, when we stopped by Chinook’s RVX booth. We initially mistook the Trail Wagon for a one-off promo trailer designed to match the Chinook Sprinter camper van hitched up to it, but upon chatting with the team at the booth, came to appreciate it as a production trailer built to precisely match the Sprinter. Rizzio himself served as the model’s champion, and the name ties into Chinook’s heritage, as Trail Wagon was once a parent company.

Chinook builds each Trail Wagon using automotive-style construction, eliminating fasteners in favor of a bonded aluminum skin. It also uses automotive wheels and tires that can be matched to the tow Sprinter, instead of a trailer wheel/tire set-up. You can clearly see the Sprinter inspiration in details from the character lines along the sides, to the wheel arches, back to the dead-ringer taillight design. The rectangular dark-tinted side windows match Chinook’s camper vans, and you can even add a Sprinter hood-style nose box by opting for the the AFE (Automotive Front End) variant. 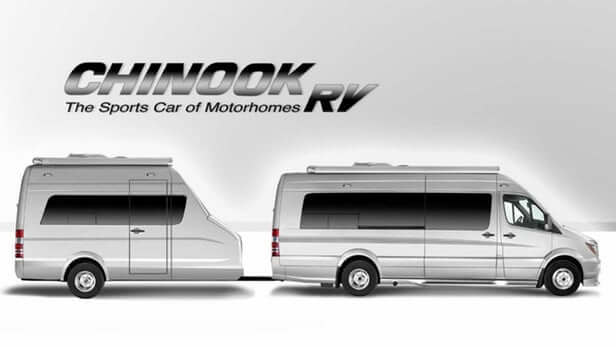 The Trail Wagon is a pretty cool little design for anyone who wants to match more than just paint and hubcaps with a Sprinter tow vehicle. But that’s not really what’s most impressive about the design.

What really held our attention was the comprehensive app control system that allows you to control the full array of camper features, including dropping the ramp door, lifting and lowering the power bed, deploying the awning, and raising and retracting the TV. We’ve been watching app control advance in larger camper vans and motorhomes, including the Sprinter itself, evolving from simple remote monitoring systems to comprehensive, smarthome-like controllers. But it was impressive to see such a robust app in a simpler toy hauler/camper.

The Trail Wagon is indeed a fairly basic trailer, a toy-hauling cargo trailer that doubles as a camper, much more than a camping trailer that can haul toys. Chinook looks at it as a “mother in law” trailer, built to add extra sleeping space plus cargo capacity behind the bumper of a larger motorhome. Its interior is largely cold and garage-like, an industrial-like cavern covered in PVC flooring, protective diamond plating and bland paint. 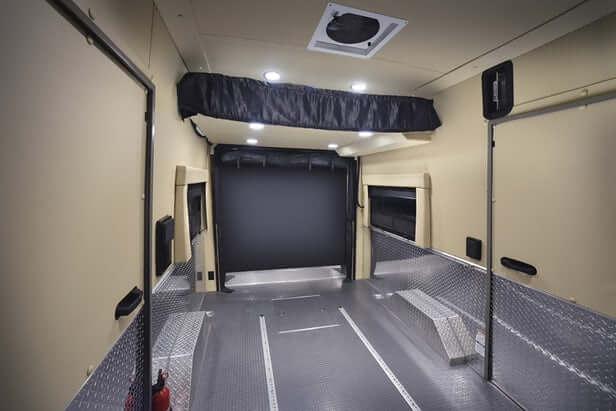 That’s not to say the Trail Wagon is totally devoid of living comfort. Its walls and roof are fully insulated with EPS foam, and the power-lowered queen bed provides a comfy night’s sleep for two people before converting into a sofa during the day. Dimmable LED ceiling lights, overhead cabinets, a powered fan with rain sensor, exterior LED entry lighting, window shades and an interior/exterior camera system also come standard, as does a 440-Ah quad 6V battery-based electrical system with solar hookup. 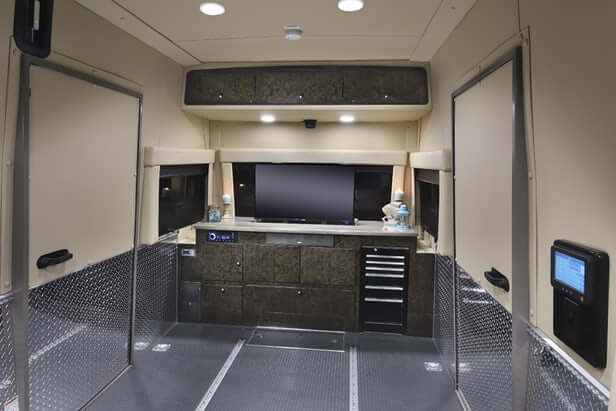