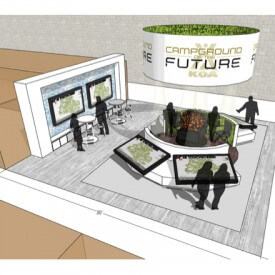 Kampgrounds of America is providing those attending the RV Industry Association’s March 12-14 event in Salt Lake City an immersive, virtual tour of visionary enhancements to the camping experience. Attendees will be able to travel in time to the year 2030 and get a glimpse into the future of camping. The forecasting is based on Kampgrounds of America’s 57 years in leading the outdoor hospitality industry, expertise in campground innovation and design, input from other key industry leaders, and understanding of camper preferences and trends through the North American Camping Report, KOA’s annual research initiative.

The Campground of the Future will focus on experimental enhancements for campers in 2030, highlighting ways to connect with nature and to each other, according to KOA. A virtual reality aspect of the display will allow people to immerse themselves into five futuristic campground concepts showcasing different design elements based on landscapes in urban, seaside, forested, mountainous and desert campground settings.

The Campground of the Future display will include features such as:

“Advancements in technology and the ever-evolving approach to environmental standards will certainly impact how people prefer to interact in the outdoors through camping, and also impact the way we design campgrounds in the future,” said Toby O’Rourke, KOA’s president. “We believe camper expectations will continue to increase over time, and the thoughtful use of technology will play a key role in meeting those expectations. … The day is quickly coming when self-driven recreational vehicles will arrive at campgrounds, park themselves in pre-selected campsites and immediately allow guests to begin immersing themselves into the outdoors.”

O’Rourke pointed out that several of the features that will be on display at the Campground of the Future exhibit at RVX in Salt Lake City already exist and are being actively tested on KOA campgrounds.

“We have a massive Solar Parasol structure that covers two acres of RV sites at our Tucson/Lazydays KOA Resort in Arizona,” she said. “That structure supplies more than enough power for the campground, while providing partial cooling shade for the RVs parked beneath it. That’s just one example of the futuristic steps that are already being taken.”

More than 39 million households in North America camp annually, according to KOA. Since 2014, more than six million new North American households have adopted the camping lifestyle, with the number of campers who camp three times or more a year – the most avid group of campers – having increased by 64 percent. This growth trend was reported in the 2018 North American Camping Report, an independent study supported by KOA.