The Nest is the first Airstream travel trailer that’s made out of fiberglass and not aircraft aluminum. You already know the standard, iconic Airstream trailer, with the gleaming, rounded silver bullet-looking exterior. Airstream has been selling those for almost 90 years. Problem is, they cost a lot of money –- the full-boat Airstream Classic starts at $149,900. Other models are less, but the company still was missing out on some of the more entry-level market for these things.

Enter Airstream’s own Basecamp model, a smaller, more turret-shaped but still-aluminum trailer for two aimed at younger, more active-lifestyle adventurers, which starts at just $36,900. The Nest is about the same size as the Basecamp and has its own style but costs…$47,900. That’s a bit of a surprise. It would have seemed like the fiberglass Nest, no matter how stylish, would be cheaper than an aluminum Basecamp.  What do I know about the trailer business?

Airstream acquired a little company in Oregon that was making the highly efficient Nest a few years ago. The Nest -– officially called the Nest by Airstream — has all the energy-efficient comforts of traditional Airstreams packaged in that stylish fiberglass exterior. 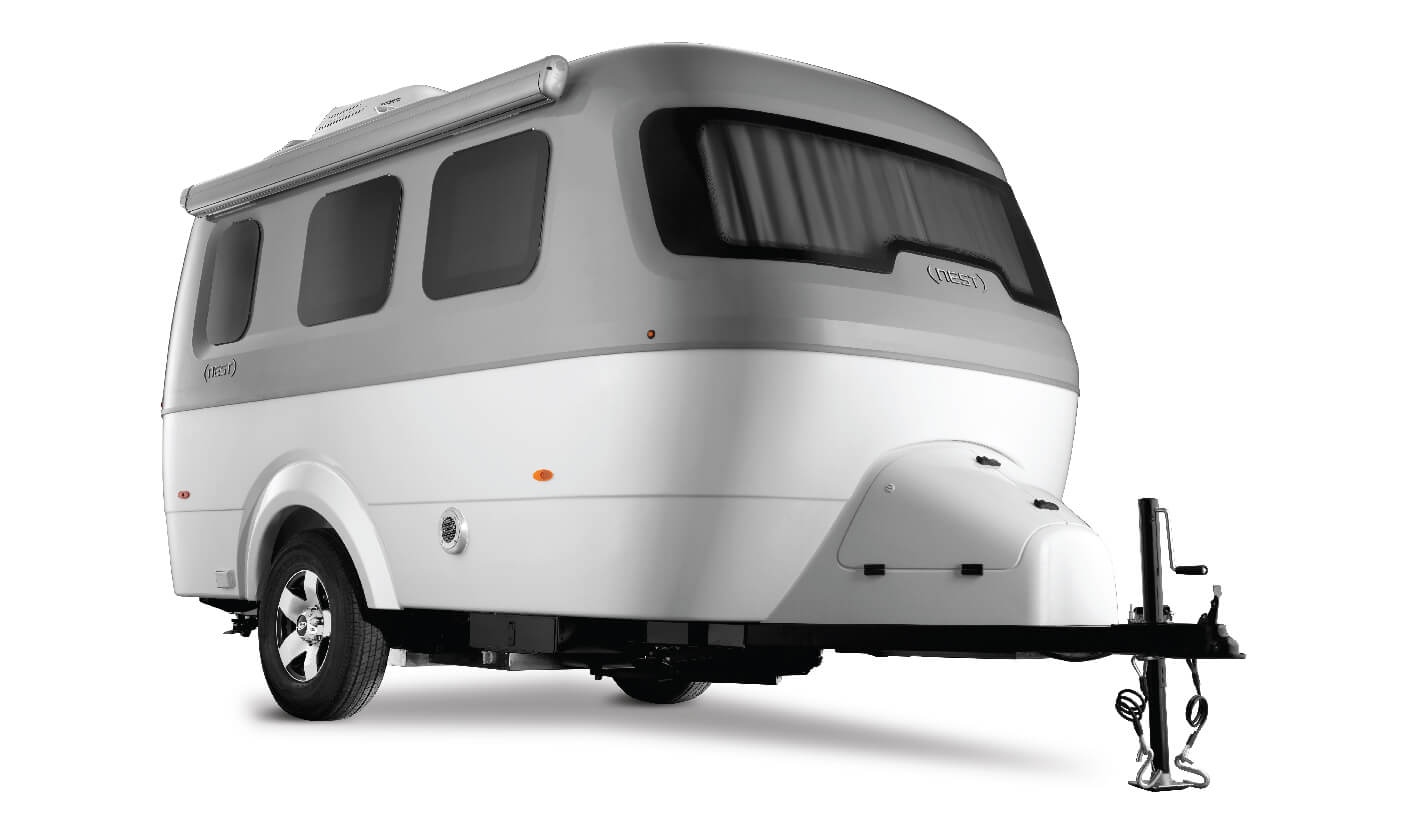 I picked mine up from Airstream’s Los Angeles sales office, where the helpful and knowledgeable staff set up my Land Rover Discovery HSE with a tow hitch and then set up the Nest with spring bars, plugged in the seven-pin connector and hooked up a radio-frequency trailer brake controller that plugged into the 12V accessory socket. I hope your Airstream dealer is as good — it should be.

Then I rolled out of the dealership lot like a Good Sam with his first retirement pay stub. 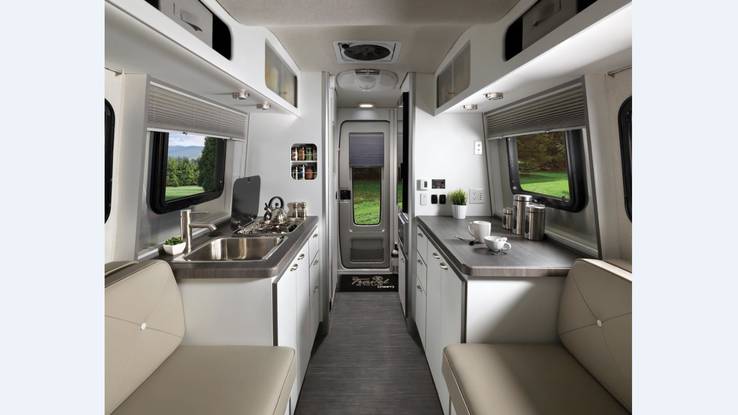 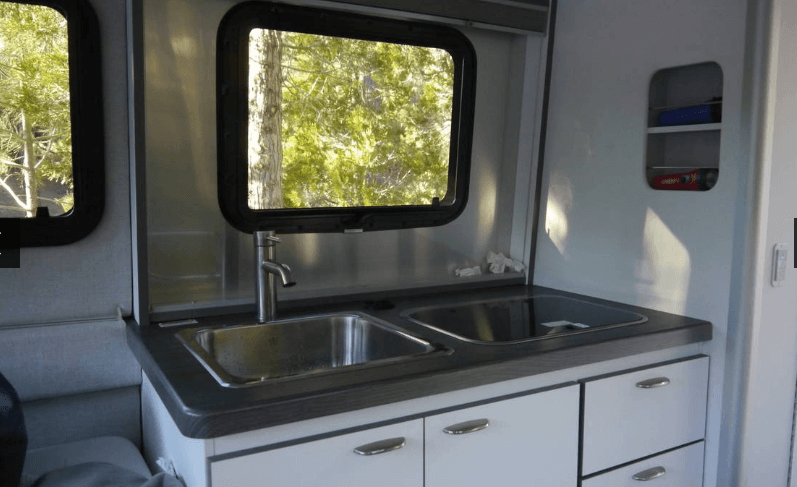 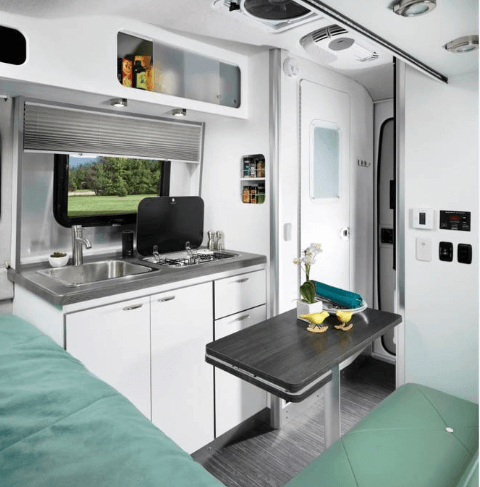 All trailers make sometimes-troubling sounds when you go over a bump or cross a rain gutter. My guess is it’s the spring bars scraping across their mounts. This one, like all trailers, creaked and popped like an ex-football player’s arthritic knee as it went through the rain gutter outside the dealership. But once underway in a straight line the whole rig quieted down.

The 2018 Land Rover Discovery tow vehicle felt up to the task, with a rated towing capacity of 8201 pounds, which is more than enough to haul the 3400-pound trailer. This particular Discovery has a 3.0-liter supercharged gasoline six making 340 hp and 332 lb-ft of torque. It’s mated to an eight-speed automatic with more drive modes than your crazy ex-spouse. Its awd goes through a two-speed transfer case likely able to take on anything, though I wasn’t planning to go off road. Loaded up with luxury, from 22-inch wheels to that ridiculous heated windshield that makes it look like you’re driving through a chain link fence, the British beast stickered at a whoppingly good $80,210. Aye Chihuahua.

I stopped at home, threw in enough T-shirts, breakfast cereal and granola bars to stay alive for the weekend, and headed out. Immediately I pointed the Discovery up Highway 2, Angeles Crest Highway. Not only is this road the best test track in the world for sports cars and sport bikes alike, it also leads to several campgrounds that are so far up in the wilderness you’d never know you were less than an hour from the L.A. freeway system. 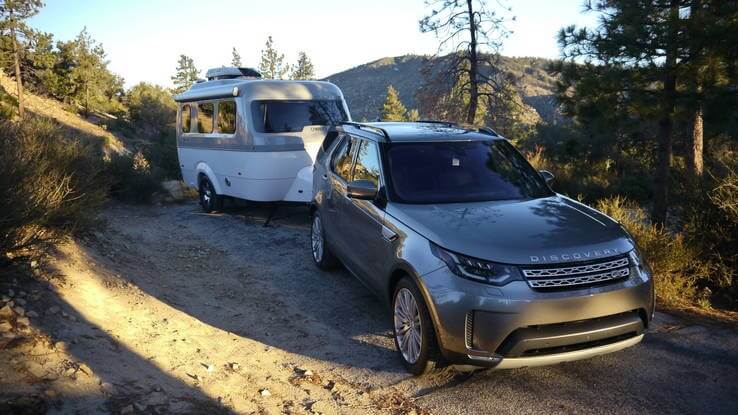 On Angeles Crest the Discovery/Nest combination was easily able to exceed the 45-mph speed limit going up the highway’s many twists and turns, and soon I was in line behind the LA commuters on their way over the mountain and home to Palmdale. When the commuters all peeled off to the left at Angeles Forest Highway, I kept straight and soon enough was entering Chillao Flats campground with a few other hearty outdoor Angelenos.

At site 18, after going back and forth about 400 times, I finally had the Nest parked and I got out to crank down the four corner jack stands that keep the trailer stable in the winds and wobbles of trailer park life. Now here I sit typing away under efficient LED lighting from the Nest’s two 12-volt deep-cycle lead-acid trailer batteries. Both batteries had been charging the whole drive up. With a full tank of propane I was ready for any icy temperatures Chillao’s 5200-foot elevation was going to throw at me.

Outside the cold wind howled. Inside, the Nest was a little cocoon of warmth and wind-resistance. I could hear the wind blowing through the trees and whipping around the Nest’s exterior, but inside I was warm and windless. It’s a lovely place in which to dwell. The poor slobs in the other sites camping in tents were all laying on their backs, staring up at the seams in their flapping tent fabric and wondering how long their flashlight batteries would last. Ha! Eat wind, suckas! 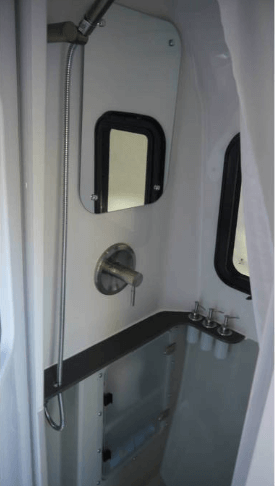 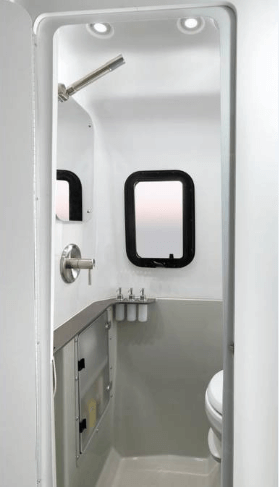 The next morning dawned calm and peaceful as the sunrise poured through the Nest’s massive panoramic front window in a vision straight out of a company a sales brochure, pine trees looking in to see who was visiting. I went outside to make sure the valve on the propane tank was cranked open then fired up the heater. Warmth and comfort poured forth (with a little strange smell at first, which burned off soon enough). The refrigerator had kept my rice milk cold, even after I turned the unit off so I wouldn’t have to listen to it cranking all night. I had also blocked off several switch lights that glowed permanently inside -– they were a little irritating.

Also, while the USB charge ports function, the 120-volt AC electrical outlets only work when the trailer is plugged in to outside AC power, which is the case for just about any trailer, motor home or sailboat. A couple trim pieces in the door and one strip of LED lighting were sloppily attached, but the vast majority of the fit and finish was superb.

There are two layouts you can get: My Nest had the configuration with a fixed bed, which takes up what seemed like half the 112 square feet of interior. I think I would have preferred the convertible bed that features a table and a breakfast nook in the front then the table drops down to form a bed at night. With limited space, all interior square footage should be versatile. And those sliding plastic doors in the cabinets slid open when the rig was underway, dumping the cabinets’ contents onto the floor. Just a couple minor irritants.

Overall it was an entirely enjoyable trip. After breakfast I hauled out to intercept the Ferrari Club’s Angeles Crest run, which I did at Mill Creek Summit, before following them (more slowly) down to their day’s activities in Palmdale. That’s another story.

The Nest is a fine weekend home for any couple looking to escape the persecution of city life. My only question is why does it cost so much? The Airstream Basecamp model I’d tried out last year felt about the same square footage and wowed all the trailer park neighbors for over than ten grand less. You can get any number of less stylish competitors for thousands and thousands less than that. And you can buy a used fiberglass-and-wood trailer for only a few grand. But you won’t get the style, the energy-efficient appliances and the panoramic windows of the Nest. 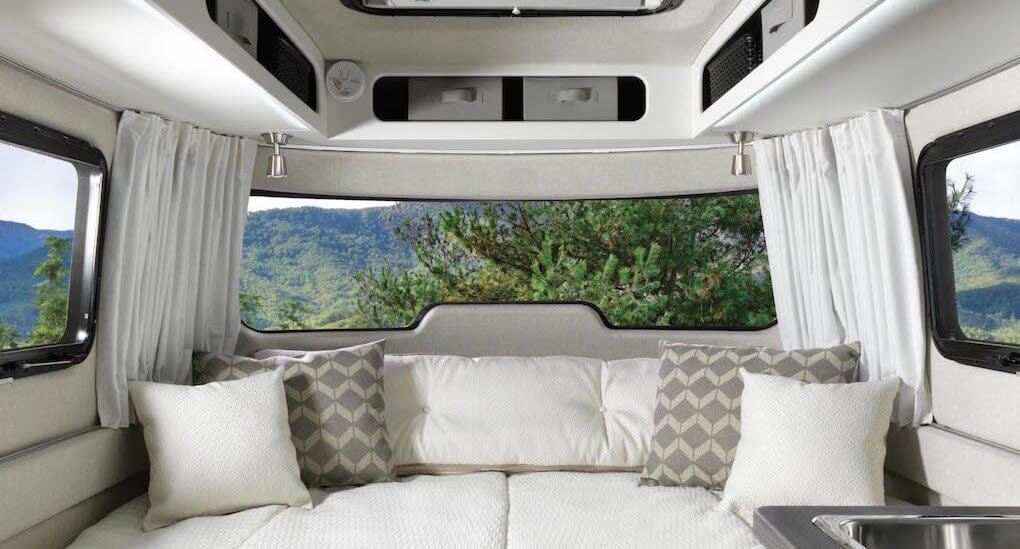 You decide. If you pick the Nest, you won’t be disappointed. 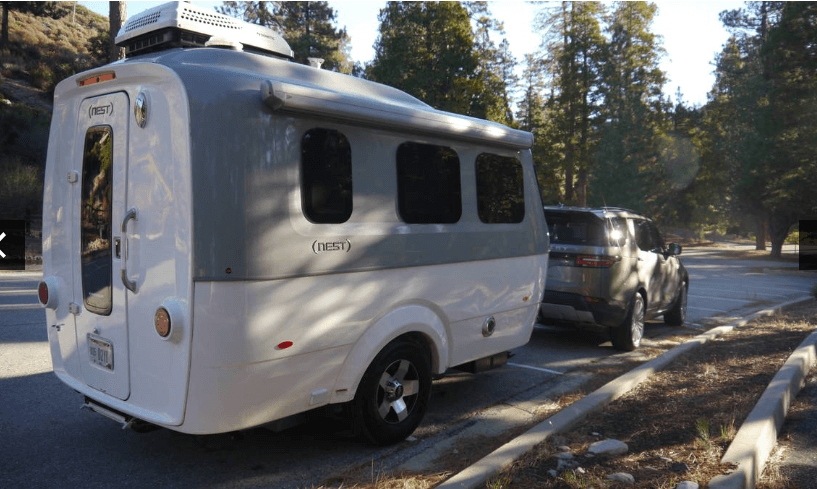 Some additional photos added by RT