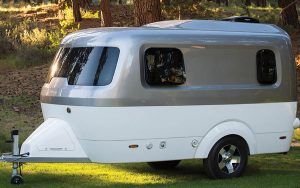 Update: Now here, summer of 2018, this highly compact fiberglass travel trailer is still a perfect fit within the Airstream line, continuing their reputation for legendary durability, fine attention to detail, timeless design, and innovative features. This molded fiberglass, no longer their legendary and iconic aluminum body, segment of the RV industry has occurred through the acquisition of NEST Caravans by Airstream. An innovative and forward-thinking move for the company, seeing the steady interest in smaller trailers with lighter weight and classic as well as highly classy features.

The originally 16-foot NEST, now 17-foot in 2018, built by designer and fiberglass expert Robert Johans, was created in 2013 (and completed recently in 2018 after a much awaited announcement) to appeal to “adventurous empty nesters” and younger “Dwell magazine readers who have a more sophisticated palette and higher expectations,” Johans explained. 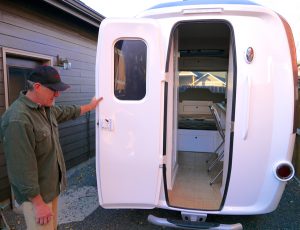 The NEST is the brainchild of Johans, President and Lead Designer of the Bend, Oregon based company. After moving to Bend  in 2006, Johans started a fiberglass trailer restoration business called The Egg Plant. It was his time spent restoring and modernizing Scamps, Bolers, Trilliums, and other fiberglass “egg” trailers where he envisioned creating his own offering to the fiberglass trailer market, instead of the traditional and iconic aluminum “bullet”, and thus the NEST Caravan company was born.

The molded components and interior appointments of the prototype NEST convey a minimalist, European appeal. “Design is everything,” said Johans about his trailer, built in Central Oregon. “Design, innovation and quality. We’re taking the industry forward with clean, contemporary, automotive styling. NEST looks perfectly appropriate behind your nice car.” Towable by even a mid-size SUV, and clearly thought out for today’s end-user. 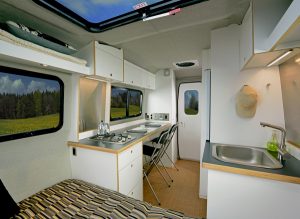 “NEST is a product that conveys sophistication, simplicity, and upscale modernity,” stated Airstream President Bob Wheeler in a press release issued by Airstream, Inc. “It made sense for us to partner and help bring this design to market.”

Expect Airstream to make some changes to the original model. “I think it’s their intention to do some in-house redesign,” said Johans. Airstream will embrace their own design, production, and sales methodologies for the NEST,” he emphasized.

After acquiring Oregon-based NEST Caravans last month, Airstream plans to start producing its own versions of the start-up company’s aerodynamic, all-fiberglass, 16-foot-long travel trailers (Note: model is now 17′ in length as of April, 2018). The stylish trailers are light enough to be towed by mid-size SUVs, crossover vehicles or light-duty trucks and easy to maneuver without jacking up fuel costs.

With modern accommodations like LED lighting, stainless steel appliances and a queen-size bed, the “bright and comfortable” interiors of the two-tone trailers boast features that were “carefully selected for form, fit and function.” *Updated: The 40-cu ft (1,133-L)  has a full-size bathroom complete with shower as of 4.4.2018: wet bathroom includes a Thetford Porta Potti Curve toilet and a Scandvik shower. The greater plumbing system is composed of an Alde space/water heater, 20-US gal (76-l) fresh and grey water tanks, and Shurflo water pump. 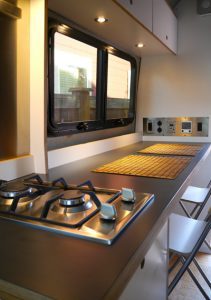 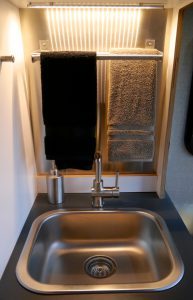 Airstream first became interested in the trailers when photos of prototypes appeared online in 2013, and company executives paid a visit to NEST’s headquarters to evaluate the 16′ 7″ x 6′ 6″ x 8′ 2″ models in-person last year before finalizing the purchase.

“We’ve been imagining a small, well-thought-out fiberglass travel trailer for quite some time and are very confident about its potential,” says Airstream president Bob Wheeler. “NEST is a product that conveys sophistication, simplicity, and upscale modernity, so it made sense for us to partner and help bring this design to market.”

The NEST is rear entry, monocoque bodied, 2400 pounds, and is 16’8″ from hitch to tail. It is by far an upscale offering as molded fiberglass campers go. According to the NEST Caravans website, the price on a base model starts at $29,995 and goes up from there, depending on additional options. Perhaps when Airstream gets them into mass production, that price may be a little lower, but when it comes to the price of any Airstream, that’s really anyone’s guess. 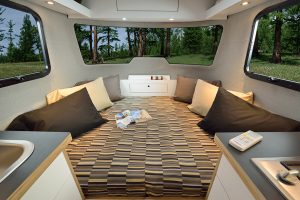 Pricing and exact availability dates for Airstream’s version of the NEST haven’t been announced, but the company anticipates hiring 50 new employees to meet anticipated demand.

Can’t wait to see Airstream’s NEST incarnation when it comes out next summer.