The teardrop trailer market is generating strong interest from consumers, who appreciate the ability to tow those trailers with even four-cylinder cars.

Since its debut in the late 1930s, the teardrop trailer – once known as “the honeymoon trailer” – has experienced an ebb and flow in popularity unlike any other RV.

Once limited to do-it-yourselfers and a small cadre of enterprising manufacturers, production of teardrops is now spread among a growing list of at least 57 builders across the U.S., Canada and Australia, according to Pat Bremer, owner of the small trailer devotee website www.smalltrailerenthusiast.com. How big is this niche market? Industry experts say the answer is almost impossible to calculate.

Statistical Surveys doesn’t have a category for teardrop trailers and neither does the RV Industry Association. Stat Surveys President Scott Stropkai says retail sales for the broad range of all single-axle travel trailers 20 feet and under in 2017 topped 40,000 units – up about 17.7 percent from 2016. That gross figure includes many of the teardrops plus some non-teardrops. He counted 52 OEMs selling single-axle trailers in 2017.

The teardrop players are an independent lot – just four manufacturers (with an application for membership from one more pending) belong to the RV Industry Association, so the monthly tabulation of wholesale shipments routinely undercounts the segment’s output. The configuration and size limits of teardrops tend to create a lot of mimicry and intense competition.

Teardrops attract the adventurous types and people of all ages, according to Bremer, who’s owned a teardrop for several years and maintained his website since September 2011. In 2017, the site received 520,000 visits.

“What I see in a teardrop owner is that they are the minimalist who doesn’t want a big trailer and just wants a place to sleep and hang outside their teardrop during the day,” he says.

“They’re also the people who like to go off the beaten path to hike and bike, and a teardrop gives you the advantage of setting up shop in a much smaller area where you’d have difficulty with a larger trailer.”

Others would contend that their RV must have basic creature comforts, such as a toilet and shower. And there comes the rub for teardrop manufacturers: What amenities go in a teardrop and what don’t?

RV PRO  recently spoke to three manufacturers to get their views on this unique product.

One of the more recent entries in the teardrop segment, Liberty Outdoors, features some of the oldest – as well as some of the newest – names in this niche market.

Based in Uniontown, Ohio, Liberty Outdoors – a strategic partnership of Little Guy Worldwide and GFM Industries – was formed in April 2017. It recently introduced the Little Guy Mini Max, a smaller companion to its Little Guy Max that debuted last year. Liberty also has rights to manufacture the Serro Scotty trailer. Both brands are built in a facility in Somerset, Pa., which draws upon a skilled workforce that once built Fleetwood and Coleman tent campers.

Liberty co-founder and Managing Director Joe Kicos says the company changed its business model and overhauled its product lineup in 2017 and now focuses on the Little Guy, Serro Scotty and Parkliner brands. The timing couldn’t be better because North American RVers are rediscovering the allure of the teardrop – a product that resurfaced near the end of the last millennium, he says.

“Our typical buyer is all over the board; I can’t give an exact demographic,” says Kicos, who has been engaged in the teardrop business since 2002, when he began to assemble a distribution network for the Little Guy brand that was built by a contracted builder. “We sell a lot to Millennials, as well as retired couples. Because the teardrops aren’t intimidating to tow, we also sell to a lot of single women.”

Case in point is the Little Guy Max, with a dry weight of 3,100 pounds, which makes it towable by many family vehicles. In April, the company began building the Little Guy Mini Max that weighs a minimum of 1,900 pounds. 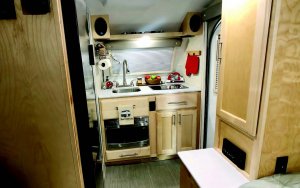 Kicos contends he was promoting teardrop trailers at a time when few others were doing so. As a result, he says, his finger is on the pulse of the market, even if his new venture’s footprint is minimal.

“Our buyers are very educated,” Kicos says. “They spend a lot of time on our website. They are quality driven and drawn to our teardrop, which we think is the luxury of teardrop trailers. They know the components we put in this trailer from the tires to the roof won’t fall apart.”

Customer preferences also are all over the board.

“Minimalists just want a ‘bed on wheels.’ The other side of the spectrum wants TVs, air conditioning, a shower, USB and DVDs,” Kicos says. “Most of our customers are somewhere in the middle.”

As for optimum weights, Kicos says it ranges between 500 and 3,000 pounds.

The company’s dealer body numbers between 70 and 80 and covers the U.S. and Canada, according to Kicos. He urges dealers to know their customers and what motivates them, to stress the simplicity of teardrop trailers and the durability of the product.

Liberty Outdoors annually sponsors the “Tearstock Rally” RVer gathering and “opens it up to everybody – even owner of our competitors’ products,” he says. This year’s will be held in July in Mackinaw City, Mich.

Liberty Outdoors also plans to begin production this summer of a retro Serro Scotty lightweight trailer like the Scotty Sportsman.

Since its debut at the very first Forest River Open House in October 2008, the R-pod has set the bar for teardrop manufacturers.

“In late 2007 and early 2008, we saw gas prices skyrocket and the economy start to plummet. We took a step back and looked at what kind of product we could introduce to fit a niche: lightweight and affordable,” recalls Kevin McArt, general manager overseeing Forest River’s R-pod, Surveyor and No Boundaries brands.

The R-pod, a spinoff from the phrase “Our Pod,” was born – and it’s been at or near the top in retail sales most years since. Stat Surveys says R-pod was the No. 1-selling single-axle trailer in North America in 2017, with about a 12.5 percent market share.

(Editor’s note: Some purists may question whether R-pod’s configuration truly matches the classic teardrop look, even though it has a teardrop look and feel. For that reason, Forest River didn’t call it a teardrop, and neither does Bremer.)

Some of the unique features of R-pod include its one-piece, seamless fiberglass skin; a low center of gravity with a rear wind spoiler to enhance towability; and a 76-inch box width, which means the tow vehicle does not require extended mirrors for a clear view behind, McArt says.

“Being self-contained, this product has most of the features a larger conventional travel trailer offers – such as a two-burner stove, convection microwave and self-contained dry bath or wet bath – but in a smaller size,” he adds.

McArt concedes that customers will differ on what they expect inside a teardrop. From the outset, R-pod’s creators decided they needed to include the basic “creature comforts” in the trailer.

“The R-pod is fully functional, but there are teardrops with none of those features that are still very successful. It’s all over the board,” he says.

All but two of the R-pod’s 11 floorplans feature slide-outs and more rugged models are built for dealerships in the West and Western Canada. 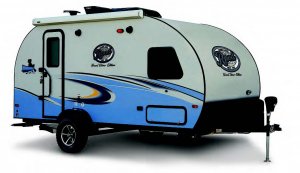 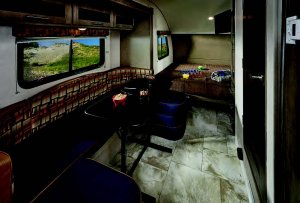 However, “It doesn’t mean Millennials aren’t buying R-pods. Some features we put in the R-pod are geared toward the techie side, like USB ports and Bluetooth stereos that are driven toward Millennials,” he adds. All R-pods are prepped for solar power, which is available as an aftermarket add-on. McArt says weight is a most crucial factor for single-axle, lightweight trailers such as R-pod, and likens the decision on whether to add a new feature to sitting on a teeter-totter. “Everything has to be balanced out very carefully to keep dry weights below 3,100 pounds,” he says. inTech Luna.

Another newer player in the teardrop market is inTech, the Nappanee, Ind.-based manufacturer of lightweight Flyer “adventure trailers,” which debuted its first true teardrop, the Luna, at last fall’s Open House. Luna subsequently earned a Best of Show honor from RV PRO  at the 2017 National RV Trade Show.

inTech solved one of the biggest issues people have with traditional teardrop trailers – feeling confined and claustrophobic – by featuring a wrap-around tempered glass windshield in Luna’s full front fiberglass cap and a 48-inch-wide frameless window on each side of the camper that allow campers to feel connected to the outdoors, according to Rich Schnippel, director of RV operations. Other unique features include all-aluminum cage construction and a transferable warranty.

Luna’s typical buyer is between 45 and 60 years old – either an established RVer or former RVer who enjoys the outdoors, according to Schnippel. Not many Millennials buy the Luna, due in large part to the price point, he figures. A fully loaded Luna has an MSRP of $19,995.

Low tow weights are crucial in the teardrop market, according to Schnippel. 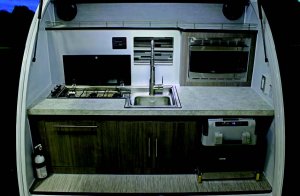 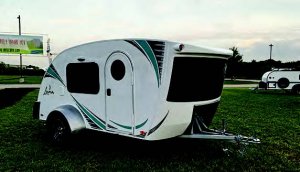 “The lower it is, the more vehicles that are going to be able to tow the camper,” he says. “That said, some manufacturers are making sacrifices in overall quality to create a lower weight. The Luna comes in at 1,800 pounds, fully equipped. This still allows it to be towed by quite a few different options, but it’s not in the low 1,100- to 1,200- pound range, which prohibits some of the smaller cars.

“We’ve made a conscious decision to build a trailer that is designed and manufactured to last a lifetime,” he adds. “Sometimes that comes at the cost of a few extra pounds.”

Price points are somewhat important for teardrops, says Schnippel. “The Internet has opened the consumers’ eyes with product knowledge. People learn very quickly which companies are committed to producing a quality product and which companies are easy to deal with should a problem arise.”

He reckons a practical price range for teardrops falls between $10,000 and $20,000 with a few climbing just north of that figure. inTech’s position on amenities mirrors that of the more traditional teardrop builders.

“We’ve had customers come to us and ask, ‘Why there isn’t a toilet? … They like the idea of ultra-small and lightweight, but some aren’t ready to sacrifice not having the toilet or shower,” he says. The unit does have a 40-inch LED TV, he notes.

That being said, inTech will be introducing a larger version of Luna called Sol this summer that will incorporate a shower, toilet and inside kitchen, he says. He hopes it will retail in the mid-$20s. Plans for a tandem-axle teardrop are in the works for later this year. Schnippel says inTech was the first towable manufacturer to offer a transferable warranty.

“We began offering this when we introduced it in 2010 with our motorsports trailers, long before any RV manufacturer would consider such a thing,” he says.

“At inTech, we have a completely different philosophy on manufacturing than other RV builders. We don’t pay piece-rate to the employees; we believe this encourages people to build things as quickly as possible with overall quality being second to quantity,” he adds. Instead, inTech pays its employees a bonus on profit sharing, so when the company makes money, the employees make more money.

He reasons, “Their focus is on building the absolute finest trailer possible; they know that if it’s built right, we will have a lower warranty claim rate and have an overall happier customer. Schnippel encourages dealers retailing teardrops to pursue unconventional channels to reach customers, such as using Facebook and other social media. Additionally, he urges dealers to consider co-marketing opportunities with retail establishments reaching similar consumer demographics.

“Don’t try to market teardrops the same old way you market traditional RVs. Get out to your customers,” he says. “If your local bike shop, wilderness shop, or kayak shop has an open house, or a Jeep event, be there. That’s where you want to be.”