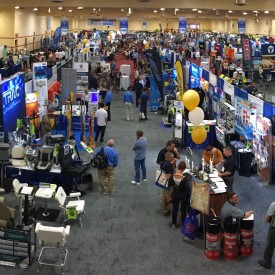 The upcoming Las Vegas show for Land ’N’ Sea, scheduled for Oct. 18 and 19, 2018, will become the supplier’s national Marine and RV show, the company recently announced, discontinuing the RV show usually held in Wisconsin, in January. Land ’N’ Sea’s Las Vegas show added RV suppliers for the first time in 2017. 2018 will change up the venue and dealers involved.“It went extremely well,” said Debbie Bellantoni, events operations and planning manager. “We’re looking to bring all RV customers nationally to the South Point casino.”
“The attendance at the show was very strong,” said Tom Schuessler, president of Land ’N’ Sea. “By having a consolidated marine and RV show we were able to provide the dealers with the opportunity to see a lot of crossover products that they might not ordinarily see at just an RV show.”
Ditto the supplier’s traditionally marine customers. That crosspollination, said Schuessler, can be elucidating for both sides.“We felt that having a consolidated show gave both our dealers and our vendors – from both RV and marine – a chance to see a much broader product offering and customer base than they would see in a traditional show,” he said.Tony Paigo, national director of RV sales, mentioned how having the show in Wisconsin was a timing and facility issue. But the real attraction was having a centralized, national show. And for the snowbird states (e.g. Arizona and Florida), the season begins after Thanksgiving, so holding a show leading into that became another beneficial aspect.

This October 2018, between 300 to 350 vendors will be setting up booths at South Point’s 80,000-square-foot exhibit hall with an expected 800 dealerships in attendance – a 20 percent increase. (Last year, the show saw about 270 vendors.) There also will be more dealer seminars than before, as well as giveaways for all-expense paid vacations. And, as in years past, the bowling night and open bar event is anticipated to be a big hit.

“By combining this on a national level, it will also bring in additional vendors,” said Bellantoni, pointing out how the show will expand its RV presence.

“We should be able to attract new dealers,” said Schuessler, “each and every single year.”