From photo-worthy vistas to outdoor recreation and everything in between, this most-visited national park offers something for everyone

Any season is a good one to visit the Smokies, but spring is our favorite. Autumn is indeed beautiful, but the roads and trails are pretty crowded. But in the spring, the trees are budding and the wildflowers are popping through the ground at Great Smoky Mountains National Park, the most-visited national park in the U.S.

There are plenty of springtime activities, as in any season. The weather may be a little more iffy, like a shower or two throughout the day, and snow at the higher elevations is still a possibility. But spring is still our favorite Smokies season. 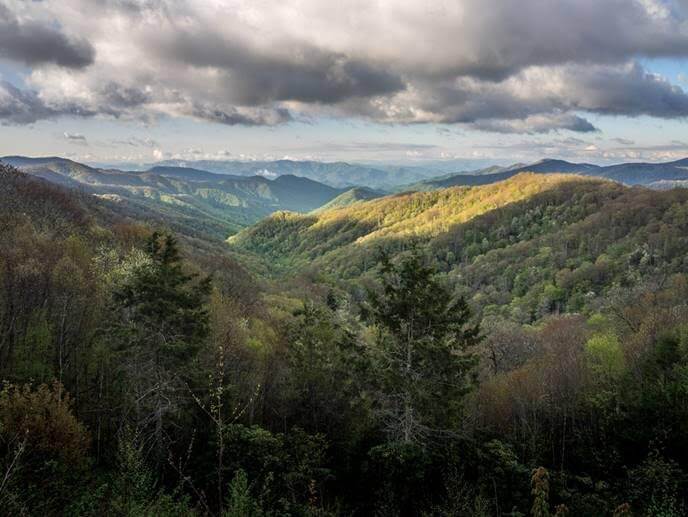 On our most recent trip, we started on the North Carolina side, arriving in Cherokee via the Blue Ridge Parkway. We discovered and visited a couple spots. Among them, the Oconaluftee Indian Village (a living history attraction), the Museum of the Cherokee Indian and an outdoor drama called “Unto These Hills” are all popular points of interest. “Unto These Hills” is not a year-round drama, running from late May until early fall. Check schedule and buy tickets online at www.visitcherokeenc.com.

The road that goes across the national park and connects North Carolina and Tennessee is U.S. Highway 441, or Newfound Gap Road. There are several side trips off U.S. 441 into less traveled parts of the Smokies. For instance, still on the North Carolina side, one road leads to the Cataloochee, a valley community that had 1,200 people living there in 1910, most of whom made their living by farming. The entrance road to Cataloochee Valley is a narrow, winding gravel road that has some steep drop-offs without guard rails. RVs can make the trip, but cautiously. Like all other campgrounds in the national park, the one at Cataloochee is primitive and has 27 sites, all of which must be reserved in advance. The campground is open from mid-March through October and can accommodate RVs up to 31 feet in length.

To get there from Cherokee, take the Blue Ridge Parkway to U.S. 19 to U.S. 276, and then to Cove Creek Road. A better route is from Interstate 40 at exit No. 20 and Cove Creek Road. Check the national park map that is available at all visitor centers.

Just after leaving Cherokee and entering the national park, we stopped at the Oconaluftee Visitor Center to pick up information on attractions and road conditions. In early spring, U.S. 441 may be closed due to ice or snow at higher elevations. At this visitor center there is a restored homeplace and cabin, which we investigated. The homeplace consists of the John E. Davis cabin (circa 1900), a meat house, a chicken house and several other outbuildings. 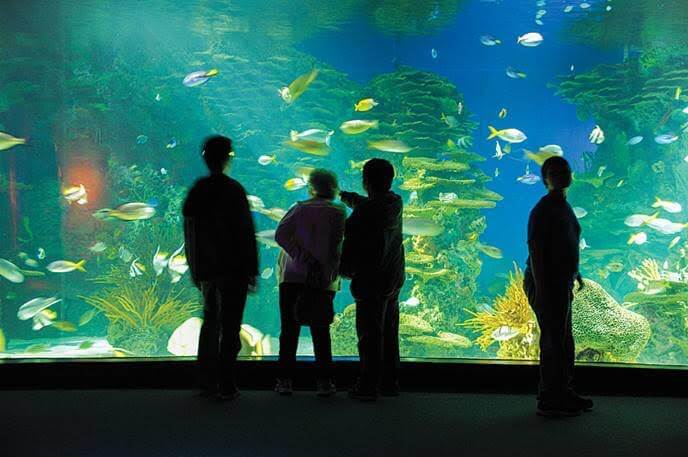 Ripley’s Aquarium of the Smokies in Pigeon Forge allows visitors to experience a variety of displays, including coral reef, ocean realm and shark lagoon.

After the visitor center, we headed across the mountains via U.S. 441. On our way up we stopped at the Mingus Mill, where corn is still ground into a saleable flour. Built in 1886, the historic grist mill is usually manned by a docent who explains the history and methods of the mill. 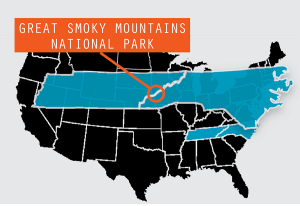 Getting There
To reach Oconaluftee Indian Village from Charlotte, take Interstate 85 South toward Gastonia. Merge onto U.S. 74 West and continue for almost 100 miles. Merge onto I-40 West/U.S. 74 W toward Canton/Knoxville. Merge onto U.S. 19 South via Exit 103. Turn right onto Tsali Boulevard/U.S. 441 North.

Before we arrived at Newfound Gap (elevation 5,049 feet), we saw another road that leads to Clingmans Dome, the highest point in the Smokies at 6,643 feet. If it is not fogged in, climbing to the top provides an incredible 360-degree vantage point on the mountains.

Heading toward Gatlinburg from Newfound Gap, there are a couple spots worthy of a stop. The Chimneys Picnic Area is a popular area for hiking and spending time in the Smokies. Then, the trailhead to the Chimney Tops, one of the most recognizable geologic features in the Smokies, is near the picnic area. Near Gatlinburg is another visitor center, Sugarlands. An easy trail to one of the national park’s many waterfalls, Cataract Falls, is located at the visitor center.

On this springtime trip, we not only enjoyed seeing the trees bud and blossom, but the wildflowers spring up (pardon the pun) at almost every turn. Trilliums of many varieties, violets, wild columbine, Fire Pink, Showy Orchis, Dutchman’s Britches, Squirrel Corn and Jack-in-the-Pulpit are just a few of the wildflowers that make their appearance in the spring. As far as wildlife, sightings of black bear are common, especially this time of year. Wild turkeys are very abundant and usually feed along the roadways and in open fields. We saw many turkeys and a black bear right along the road as we were coming down from Newfound Gap. 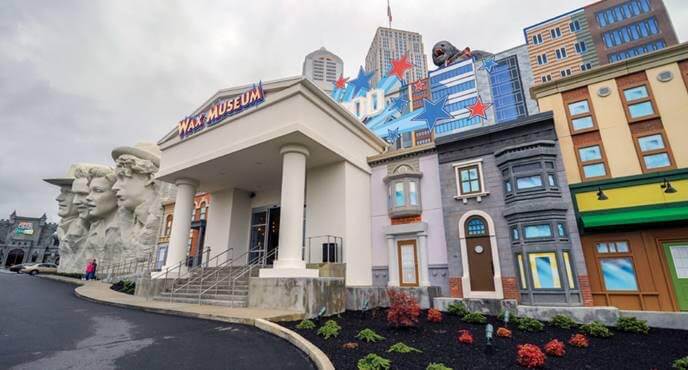 The two-story Hollywood Wax Museum in Pigeon Forge bills itself as the only wax museum in the country devoted entirely to celebrity figures, from Charlie Chaplin to John Wayne to Brad Pitt.

There are 10 developed campgrounds within the national park. Each campground has restrooms with cold running water and flush toilets but no showers nor electrical or water hookups. Campsites at Cades Cove, Cataloochee, Cosby, Elkmont and Smokemont may be reserved online at www.recreation.gov or by phone at 877-444-6777. All other campgrounds are first-come, first-served. Smokemont is the more easily accessible on the North Carolina side and is near Cherokee. Besides the national park campgrounds, there are plenty of private ones located in any of the gateway towns like Gatlinburg, Townsend, Pigeon Forge in Tennessee and Cherokee.

Gatlinburg and Pigeon Forge are the more commercialized of the gateway towns. Gatlinburg is less RV-friendly because it is usually crowded with other vehicles and pedestrians. But there are side roads that bypass most of the crowds. Consult a map or GPS. Nevertheless, we usually stop in Gatlinburg (and Pigeon Forge, for that matter) to check out the attractions, shops and restaurants.

There are plenty of things to do with the family in Gatlinburg. Ripley’s Aquarium of the Smokies is one of our favorites. The Space Needle in the center of town provides a 360-degree view of the surrounding mountains from its 400-foot tower. A 2.1-mile aerial tram takes visitors up to Ober Gatlinburg, a mountaintop family adventure where there are amusement rides, wildlife, an indoor skating rink and, during winter, snow skiing. Variety shows of many sorts are popular attractions in Pigeon Forge along with many shops. 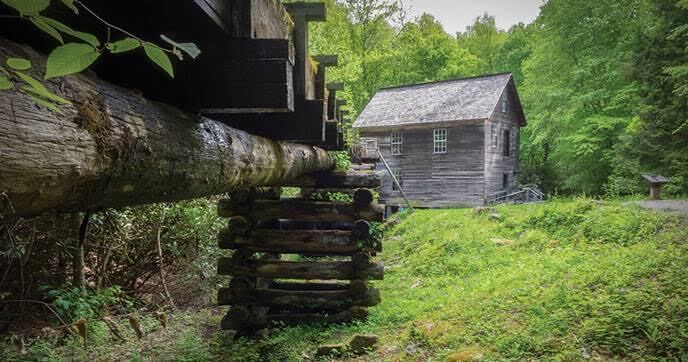 Built in 1886, Mingus Mill is a historic grist mill that utilizes a water-powered turbine to power machinery.

Restaurants are aplenty in any of the gateway towns, especially Gatlinburg and Pigeon Forge. All sorts and any cuisine are available, but the predominant types are pancake houses. But they are a must and there is a reason for so many.

One of our favorite things to do while in the Gatlinburg area is to visit the Roaring Fork Motor Nature Trail. From traffic light No. 8 in Gatlinburg, turn onto the Historic Nature Trail Road. This road takes visitors back into the national park and to the 5½-mile-long, one-way, narrow, winding loop road along rushing mountain streams with glimpses of old-growth forest, and a number of well-preserved log cabins, grist mills and other historic buildings. There are parking areas at the trailheads for two waterfalls, Grotto Falls and Rainbow Falls.

Our adventure in the Smokies ended when we left Gatlinburg. We took U.S. 441 through Pigeon Forge to Sevierville, and picked up state Route 66, which led to I-40. We know we’ll return sometime soon. We just have to figure out which season it will be.