From millennials who may have no introduction to baby boomers reliving their youth, the vintage trailer culture is a multigenerational trend that shows no signs of slowing down. 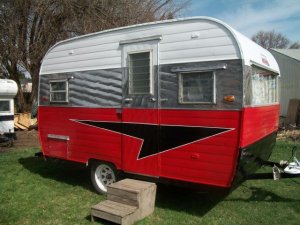 There seem to be as many theories for why renovating retro campers has gone mainstream as there are people who own them. No doubt Mary Jane Butters’ popular 2012 book “Glamping” helped, but others have nodded to the whole tiny living movement, the rise in housing costs and the satisfaction of unplugging in this techno-takeover world we live in — not to mention how restoring a small trailer is a simpler do-it-yourself project than tackling a brick-and-mortar house.

No matter the reason, the allure of vintage trailers has created businesses and strong social networks. As far back as 1999, two sisters set out on a one-week camping trip in their classic trailers. One thing led to another, and today they head up Sisters on the Fly, a 10,000-member-strong, women-only outdoor club where many of the sisters own trailers they’ve renovated themselves. 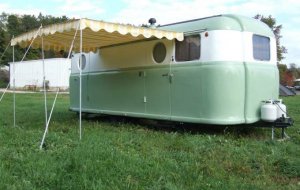 Vintage trailer rallies draw hundreds of campers dating from the 1940s through ’60s with names such as Westwood, Shasta and Spartan. This year, Reno, Nev., even dived into the frenzy, inviting classic campers to cruise alongside classic cars for the first time ever at Hot August Nights.

Closer to home, the “tin can” craze has caught the imagination of Denise Johnson, owner of El & Em, a DIY and vintage store in Old Town Battle Ground. Her tent vendor First Friday event received so much positive feedback that she’s hoping to restore three trailers to expand her shop space and create a unique atmosphere. 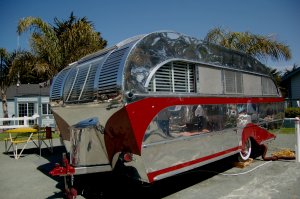 The 16-foot 1965 Aladdin she acquired a month ago is her third restoration project. She fell in love with the concept through the renovation of a 28-foot 1962 Airstream a couple of years ago. Her Aladdin is all original on the inside, including countertops, light fixtures and wood wall panels. The process may sound gutsy, but Johnson insists that with YouTube and other internet forums there’s always support if a person runs into a snag.

Angela Harvey, owner of Wickering Heights in Woodland, has been putting on Ragtag Revival for the last several years. This year, in addition to the dozens of vintage vendors, she hosted Southwest Washington’s first vintage trailer rally. About 20 trailers descended on her property and were opened up for public viewing.

Harvey owns seven trailers — at various stages of restoration — ranging from 1951 to 1972. Working with the county, she’s hoping to create a vintage trailer social club with an Airbnb-esque piece where trailer owners can come and enjoy the family-friendly atmosphere and travelers can have an up-close, overnight experience staying in one. She also owns a Shasta that she’s converting into a treehouse. 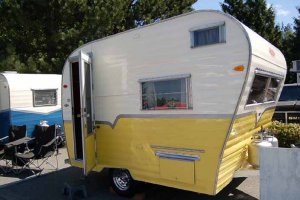 It’s not a stretch to understand why a certain age group has an affinity toward vintage, but Harvey gets a particular kick out of younger folks catching the passion.

The affinity for classic campers “ended up on social media and was introduced to a new generation,” Harvey said. “I love when people discover something that they think is new to them. I think it’s great that a new generation has gotten a hold of it. They’re better at sharing it.”

In order to host the rally, Harvey teamed up with another Woodland resident, Ren? Perret. Perret and her husband, Jeremy Ralston, are the hosts and sponsors of the Mt. Baker Vintage Trailer Rally in Lynden, the largest rally in the Northwest. Together, they own 13 trailers ranging in age from a 1942 Plymouth Masonite to a 1970 Duke.

Masonites are an excellent representation of how these trailers are a part of living history. Predominantly referred to as “tin cans” for their aluminum exterior, trailers were frequently skinned in hardboard during World War II when aluminum was scarce.

Six years ago, Perret and Ralston looked for an affordable way to buy a trailer without having to finance it. An older model needing repair sold for $400 and, as their budget allowed, they whittled away at their to-do list.

For Perret and Ralston, rescuing old trailers is the greatest draw.

The 1970 Duke was found on its side in a field, where it lay for 15 years. Their 1957 Aristocrat was pulled out of an abandoned storage facility in Union Gap, and 850 pounds of garbage was removed from it before it could be towed home.

So entrenched in the trailer culture are Perret and Ralston that they opened Down River Vintage Trailer Restoration at the end of 2016. Much like FlyteCamp in Bend, Ore., Down River rehabs old trailers for clients near and far.

“We bought this trailer (their first one) to save some money and have a fancy tent, and it’s turned into our livelihood now and our lifestyle,” Perret said.