Think people are all about super luxurious getaways these days? A new study says toasting marshmallows and sleeping under the stars are more popular than ever before.

According to a report released by Kampgrounds of America (KOA), a group of privately held campgrounds, more and more Americans are now spending their leisure time camping.

KOA data found that 61 percent of survey respondents said they had gone camping in 2014. That’s a jump from 58 percent in 2013.

In 2016, KOA estimated that around 37 million households in the country went camping at least once during the year. And almost a third of campers reported going into the woods three or more times in one year. 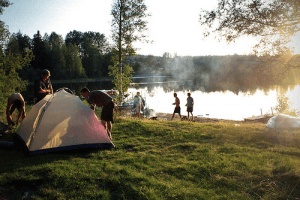 Since 2014, the percentage of campers of who say that they take three or more camping trips a year has increased by more than 36 percent. Infrequent campers (those who go just once a year) have simultaneously dropped by 10 percent. In 2017 half of all campers surveyed said that they’re planning to spend even more time camping this year.

More than half of millennials surveyed (51 percent) said that they planned to go camping more often in 2017. Millennials also mark the age range to most enjoy the activity in large groups–10 or more travelers.

But neither millennials – nor campers in general – are completely cutting the cord. According to the study, 95 percent of people who go camping bring some sort of technology with them while 37 percent of campers said that some sort of tech was actually required for their trip in order to spend more time outdoors. About half of survey respondents indicated that least free Wi-Fi was a big factor when deciding where to stay.

And when it comes to sleeping, conventional tents were the most popular, according to the study. But the number of campers electing to use RVs or cabins is also increasing.