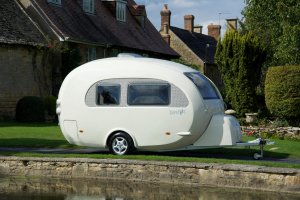 There’s a subset of tiny houses that include mobile tiny houses, and the Barefoot Caravan fits the bill. It almost looks like something our grandparents might have had hooked up to their cars, but apparently they do make ’em like they used to.

At least, in Britain, they do. Solicitor Cathy Chamberlain wasn’t able to find the camper of her dreams, so she designed her own, along with some students at Coventry University. Motorcycle and sidecar company Watsonia Squire helped put it in production, and now she’s selling the curvy campers to like-minded individuals. 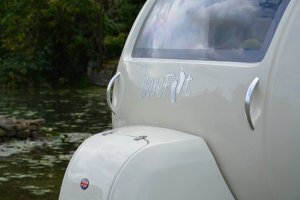 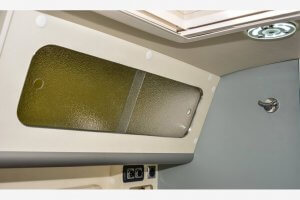 “It was a weekend camping trip which inspired me, when I got cold and wet. It goes dark and everybody gets a bit damp. I thought, ‘Why is there not a trendy caravan?’” she tells Yahoo. “I wanted to make it look nice from the outside as well as the inside.” She’s been taking hers around to festivals and getting lots of attention. Indeed, retro-style campers are definitely having a moment, as evidenced by Relic Trailers and gussied-up Airstreams. Of course, for those who want to live off-grid and on the road in something more futuristic-looking, there’s always the similarly egg-shaped Ecocapsule. 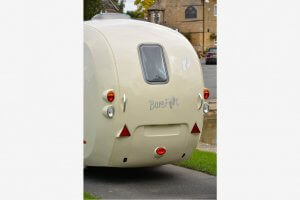 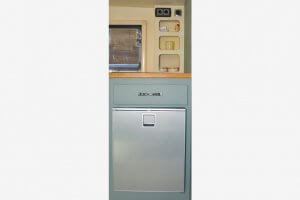 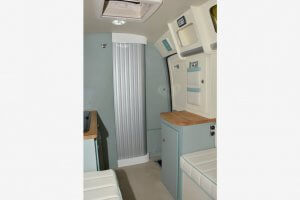 It took Chamberlain three years to get her design right. It’s over 16 feet long, and the fiberglass body, which is a single piece, comes in duck egg blue, Cotswold cream, or graphite gray. Inside, in about 105 square feet of living space, there’s small fridge, cooktop (but no oven), and sink; a bathroom with a shower, toilet, and sink; heating system; LED lights; seats that convert into a six-foot-by-six-foot bed; and room for a wardrobe. There are also some cubbyholes and cupboards for storage, and the countertops are real wood. 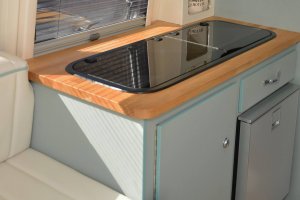 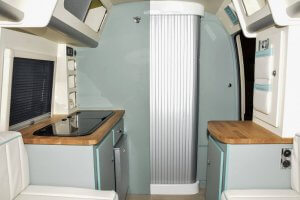 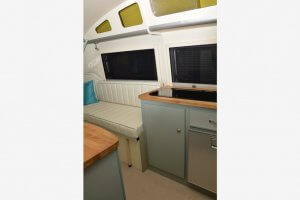 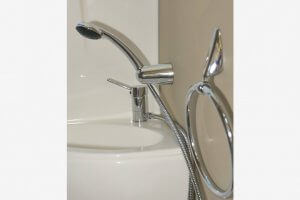 Owners get to choose a few of the details to fit their preferences, like the color of the kitchen units and upholstery and the fabric for the curtains. “It is done to the standard that you would want to have your own home,” says Chamberlain. “Ideally, this caravan is made for a couple, or a couple with a small child,” she tells Caravan Finder. She pictures as a weekend-getaway mobile, as opposed to something like Tiny Heirloom’s structures, which are mini luxury homes on wheels that are meant to be lived in by families 24/7, 365 days a year. 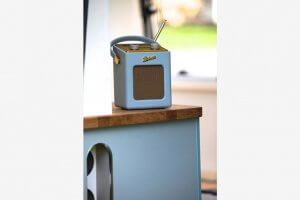 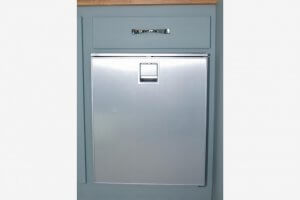 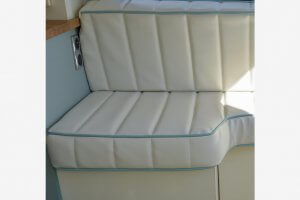 The price for the little camper comes to about $32,000, which might be a bit steep if you’re just using it for the occasional camping trip. Still, it’s a pretty cute contraption to have yoked to the back of your car.

*RT opinion: We love the retro feel and look of this model. A very pleasing ambiance, a good amount of space, and lots of charm. We wonder about the size of the bathroom although it is lovely, and would prefer to  have a kitchen with microwave oven included, but we understand this is a weekend and event caravan. It looks very much like the Forest River R-pod at a much higher price point. Even harks comparisons to the upcoming Airstream Nest, Winnebago’s Winnie Drop, and the Jayco Hummingbird. Luckily, small trailers and ultralites are a growing trend. We’re excited to see the ingenuity, selections, and amenities growing in this class of towable. We feel that this model serves a particular niche camper. Barefoot Caravan if joined with a U.S. manufacturer, would likely drop the price nearly in half in production, which we feel it would need to target a wider audience. For now, it’s a select few and for select travels.

Previous Article Will Your Next Best Friend Be A Robot? How About Your RV Companion?
Next Article More Best Vehicles To Tow Behind A Motorhome/RV