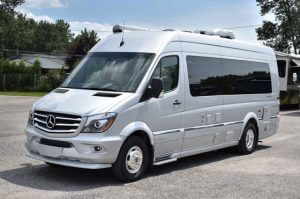 Airstream’s Interstate is one of the top-selling Class B diesel motorhomes in the United States. Which seems ironic, simply because on our recent adventure with a 2016 Interstate Grand Tour EXT, most people who inquired about it — and there were many — didn’t even know that Airstream made a Class B. This isn’t Airstream’s first foray into the Class B market; the Interstate has been around since 2004 — but back in 1989, Airstream built Class B’s based upon the Ford Econoline chassis, which lasted for 10 years. 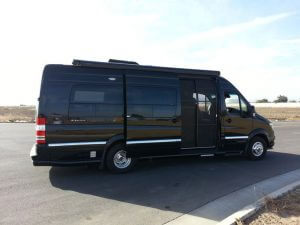 Grand Tour EXT comes with a screen door for added air and another angle for your travel stop views.

Many people associate Airstream, the oldest company in the industry currently building RVs, with those iconic, sleek aluminum silver bullet trailers being towed down the highways and looking fetching in campgrounds and RV parks. For 2016, Airstream made a few changes to the Class B Interstate Grand Tour EXT, introduced last year, including adding chassis underglow lights. The Grand Tour EXT is offered in two floorplans, one with a pair of twin beds and one with a power sofa that converts to a 70-by-82-inch bed, the latter of which we tested. 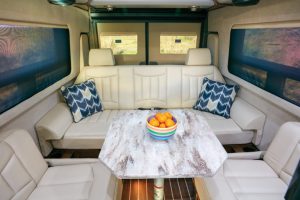 Our springtime stay-off-the-interstate-as-much-as-possible-in-the-Interstate tour got postponed for a night because after all the hype, El Niño decided to rescue California from its drought and unleashed a storm on the day we wanted to leave. This seemed apropos since the Grand Tour EXT sports a nautical theme with its Ultraleather seats and sofa from the marine industry that stay cool and won’t crack or fade, 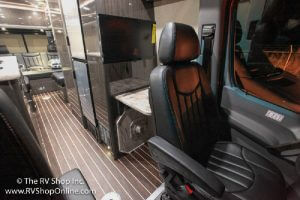 waterproof marine-grade plank-style synthetic flooring and a 9-by-9-inch porthole-style window on the lavatory door. At the crack of dawn the next morning, it was all hands on deck for our crew of two to pack up the Grand Tour and take it on its maiden voyage. Our mission: to find wildflowers.

The Interstate is built on the Mercedes-Benz 3500 Extended Sprinter chassis with a 3.0-liter V-6 turbodiesel engine. We sailed smoothly down the road on its dually chassis, due in part to the rear air suspension (a $7,500 option), which is regulated as road conditions change. The air bags are pressurized to make for a stable ride and lessen side-to-side movement, which worked pretty darn well considering that a lot of California’s roads are riddled with potholes and pavement seams. The air suspension doubles as a leveling system, which can be controlled by the remote panel near the driver’s door.

A 9-by-4-inch monitor takes the place of a rearview mirror and displays views from three cameras (backup and left/right directional changes). The Mercedes-Benz Driver Assistance Package includes Collision Prevention Assist, Lane Keeping Assist, Blind Spot Assist, Front and Rear Parking Assist and Front and Side Camera Assist, which ups the ante quite a bit in the safety department. 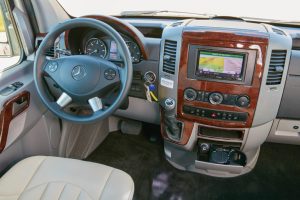 Directly behind the driver’s seat is a workstation with one of three USB ports and one of two 24-inch LED HDTVs. Also in the area are the systems’ command center and monitor panels. The Grand Tour’s entertainment system includes Pandora Internet Radio connect, iPod video cable, SiriusXM Radio Universal, Sirius antenna and tuner, and a Blu-ray player.

The Grand Tour, with an exterior length of 24 feet, 4½ inches, has a narrow floorplan, and with just 18 inches of aisle width, we learned that two people in the aisle created congestion at times.

Later, at our primitive campsite, we discovered that this floorplan included a great workspace for efficient food prep, and easy access to our cooking gadgets and food. A flush-mounted stainless-steel sink with folding faucet and Italian-made SMEV two-burner cooktop are incorporated into an almost 6-foot-long Corian countertop; both have glass covers. Below the counter, spacious drawers (best accessed from the side, otherwise you’ll be back up against a wall, literally) in dark Columbia Walnut of varying sizes are visually attractive as well. Adding to the opulent feel, light-colored fabric around the frameless windows, called Majic Suede (also from the marine industry) wipes clean with soap and water. 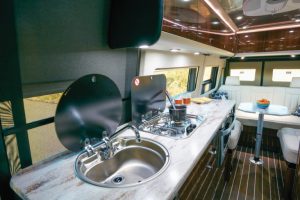 Getting large hands under the sink faucet was problematic because the faucet is placed too close to the front of the sink, so access from the side worked better. Tilting the fold-down faucet, rather than keeping it upright, worked better, too. Below the sink is a handy drawer with a built-in wastebasket, space for cleaning supplies and a towel rack. In fact, there is so much storage space that we couldn’t fill the cabinets for our outing, even though I tried my best! 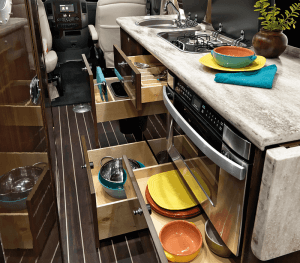 We also appreciated the roominess of the 3.1-cubic-foot Nova Kool refrigerator and freezer. Each compartment is 25½ inches tall and 14 inches wide. The stainless-steel marine-style all-electric refrigerator consumes very little power and runs off 12-volt DC and 120-volt, and blends nicely with the cabinetry. The only thing missing in the fridge was a drawer to keep fruit from rolling around, so we kept round things in a bowl so they wouldn’t shot-put out of the refrigerator when opening the door after travel.

A 24-inch drawer-type stainless-steel Sharp microwave is mounted below the counter for easy reach and will make shorter folks especially happy. The floor-to-ceiling pantry has adjustable shelves and three slide-out drawers and can quickly transform into a wardrobe with the attached closet rod. Hidden from view when the pantry door is closed, specialty hinges allow it to be opened almost all the way back so as not to block the aisle when open.

While there’s no hood directly over the range, a Fan-Tastic Vent pulls steam and smoke out of the galley while cooking, and the aluminum above the stove is easily wiped down. The entire ceiling, in fact, is aluminum like those in the company’s travel trailers, with two rows of LEDs shedding plenty of light. There’s also a dimmer switch so you can set the mood, plus a ceiling-level strip of LEDs and floor-level lights. All in all, the area works well and the only issues we encountered were related to the 6-foot, 2¼-inch interior height. The crank handle for the Fan-Tastic Vent hangs down close to the entryway, so tall people smacked their heads on it the first time through while focused on the galley. An easy fix would be to rotate the vent so that the crank handle is by the wall. The air-conditioning unit reduces interior height as well, and open overhead cabinets, with sharp edges, posed another hazard for tall folks. We got in the habit of keeping them closed.

The Grand Tour EXT sleeps two but has belted seating positions for seven including the back lounge. A remote controls the day-night shades, and we liked that the shades can be closed individually or all at once with the touch of a button. They worked wonderfully to keep light out in the morning and privacy in.

When it came time for bed, the sofa reclined electrically. We then laid the side seats flat and unstrapped two fold-down headrests to transform the back of the Grand Tour EXT from a mini living room into a 70-by-82-inch bed. Although the bed is made of sections, it was fairly comfortable, but adding a memory foam topper made it even better. Above the sofa/bed is a 30¾-inch-deep cabinet (with a light that automatically comes on), which was cavernous enough to hold bedding, the memory foam topper and pillows. The cabinet also has extra nooks and crannies, so there’s lots of storage space, though some things were hard to retrieve because parts of the cabinet are so deep. A collapsible rod for hanging clothes is located over the sofa/bed. 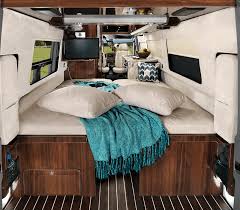 The water closet is just that — a toilet, sink and shower all in a fiberglass enclosure practical enough for small or average-size folks to get business done. The 2-foot width was roomy enough for me to lather up and take a quick shower using the hand-held sprayer that doubles as the sink’s faucet. Even though there’s a shelf over the loo for toiletries, I found it convenient to use the sink as a shower caddy. There’s a shower curtain on the door side to keep a towel dry on the door-mounted rack, and the mini ceiling fan does a good job pulling steam out. A wall-mounted mirror, the only vanity mirror in the motorhome, swings out, and there’s a retractable clothesline. With a ceiling height of 5 feet, 10 inches, and no skylight to add headroom, taller folks will not be able to stand up straight. 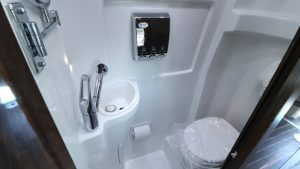 Inside, the furnace warmed up the Grand Tour quickly. The motorhome is well-insulated, keeping temps inside nicely regulated and hushing outside noise. 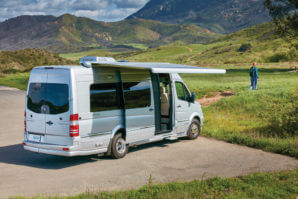 The Airstream Interstate Grand Tour EXT has everything you need in a premium Class B that feels at home in a full-service RV park or a secluded campsite — without sacrificing luxury, versatility and efficiency. Just be sure you’re traveling with someone who knows how to keep the deck clear.

Review Credit: Motorhome.com (Note: our inclusion is a somewhat abbreviated and adjusted version of their personal and at-length review of their test-drive and trip experience)