C-C
Comments are off 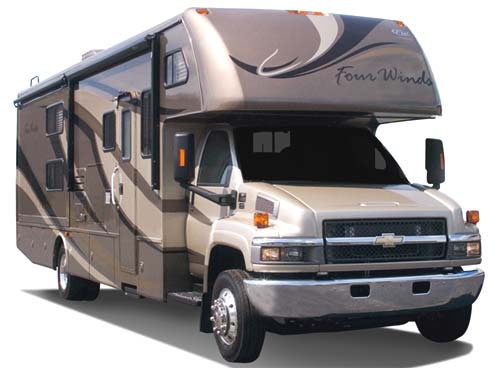 Four Winds International has introduced a new generation of upscale Kodiak Class C motorhomes. Models 36A and 36B are available in the Chateau, Dutchmen and Four Winds Class C lines. They are built an impressive 26,000 lb. GVWR Chevrolet Kodiak chassis which boasts a gross combined weight rating of 30,000 lbs for maximum towing capability. The new models are power by a 330 horse power Duramax diesel engine and a heavy duty Allison 2350 Series 6-speed transmission. An E-Z ride suspension system has also been employed to provide an ultra smooth ride with superior driving stability.

The new Kodiak models have a great balance of style and power. They are high-end all the way around and complimented with a chassis that wont disappoint, said Scott Jacobson, National Sales Manager, Four Winds International.

The new Kodiak models have a great balance of style and power. They are high-end all the way around and complimented with a chassis that wont disappoint, said Scott Jacobson, National Sales Manager, Four Winds International.

Model 36A is a spacious triple slideout floor plan with a master king bed and two bunk beds built into one of the slide rooms. The bunk beds are available with either a single 19 LCD television across from the bunks or individual LCD monitors with head phones at each bunk. Model 36B is a double slideout floor plan with a large kitchen area and a master king bed. This model also features a roomy split bathroom with a full-size corner shower.

Both models are 37’6″ long with 84″ interior ceilings to give you plenty of room to move about the coach. Entertainment features for both models include a mid-ship 32 LCD television, a 26 LCD bedroom television and an optional home theater system. Elegant European style cabinetry is used throughout the coach along with a solid surface kitchen counter-top to complete the ensemble. On the outside these models feature molded fiberglass front and rear caps, convenient side hinged luggage doors, an impressive 100 gallons of fresh water, and a 10,000 lb. hitch. Also available is an optional outside entertainment center that features a 26 LCD television and a stereo system with an integrated DVD player and iPod hook up